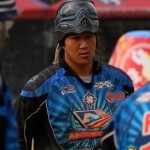 Read on as Pro paintball player Tim Montressor of the Philly All Americans shares his personal story of his journey to the top with the All American Paintball team. This story follows on the heals of yesterdays article announcing that the All Americans will be taking the season off and is definitely worth a read.

The ominous gray clouds of the dreary winter afternoon hang over the cold cement parking lot as the boys sit outside the bookstore while anxiously and restlessly flipping through the pages of the magazine at a frantic pace. The teenagers point and comment with every turn of the glossy sheet dreaming of possibilities and hoping that their delusions can one day become a reality. The allure of becoming a professional football player, basketball player or baseball player has sputtered away leaving only the optimism of becoming a world class paintball player. Despite the peculiar looks and constant questions, society is intrigued by the game of paintball and the notion that someone can commit such a large portion of themselves to one goal and one objective with little to no monetary return. Nonetheless, such grand outlooks and sociological concerns are irrelevant to the boys as they admire the images of the professional paintball players and their shimmering trophies and oversized plaques. At 25 and about to turn 26 in a week and almost 11 years since I sat outside the Barnes and Nobles with my friends, my dream has been lived and the opportunities that life and God have provided within the game of paintball continue to be seized and consumed, further fueling my life and allowing a new door of prospects

For over 20 years, a large quantity of aspiring paintball players has dreamt of playing on the All-Americans. Despite the public outcries and opinions pertaining to certain players or sponsors, it was always hard to deny the intrigue of a team that had endured every transition of the sport and maintained the ability to remain competitive. Much in the way the Yankees or Red Sox have built a legacy in baseball with their staying power and ability to survive, the All-Americans had forged through the muggy intermediary periods of our game. Coincidentally, I grew up in the Midwest; therefore it was inevitable to hope for a tryout with Detroit Fusion or Chicago Aftershock, it was a right that came with location. But, I had always respected the All-Americans and their drive for victory and perfection that defined the team and its players and so I was able to still imagine myself waiving the All-American banner after a victory. 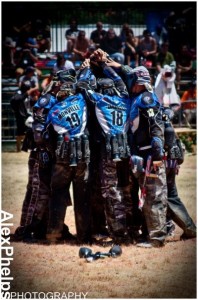 In 2004 I joined the team out of necessity when I had nowhere else to go and once I was provided a chance to leave I stayed because I didn’t want to go anywhere else. I do not consider myself too masculine to admit that a piece of
my heart has been broken; but not in the way that a girl can strain a boy’s emotions or the loss of a family member evokes mourning, but similar to waking up from an amazing dream that seemed all too real and sadness arises because the harsh reality of daily life is overly mundane. Still, much like the players that came before us, the 2009 team all poured our sweat and tears into making the Philadelphia Americans a success, and we did it on our terms. Nonetheless, in the same manner that a proud parent observes their child begin college and embark on a new adventure, the players of the All-Americans will witness their careers in the game and in life evolve into something fresh and different.

To those that have asked, YES, the All-Americans will not be competing in the 2010 season. Nevertheless, I would be remiss to tell the futures of all the players because I do not know what everyone will do for this season or the next. Some players have moved on because they felt it was time to venture forth and some have moved on because they had to. It was an ending that I could never imagine because the book was too long and the conclusion appeared too distant. Nonetheless, it is not a gloomy day for me or the players because it is simply an unavoidable evolution of life. So, I no longer have to welcome a handful of teammates into town or fend them off my refrigerator or protect my beer like a new born child. However, the cliché that all good things come to an end holds true, it’s just a matter of when the end arrives.

In closing, I would like to thank everyone that made our dream a possibility; most importantly all of our fans, supporters, moms, dads, friends and sponsors that supported us not only when we were up but most significantly when we were at our lowest. For without all of you, our hopes would have remained unfulfilled and plastered between the shiny covers of magazines.