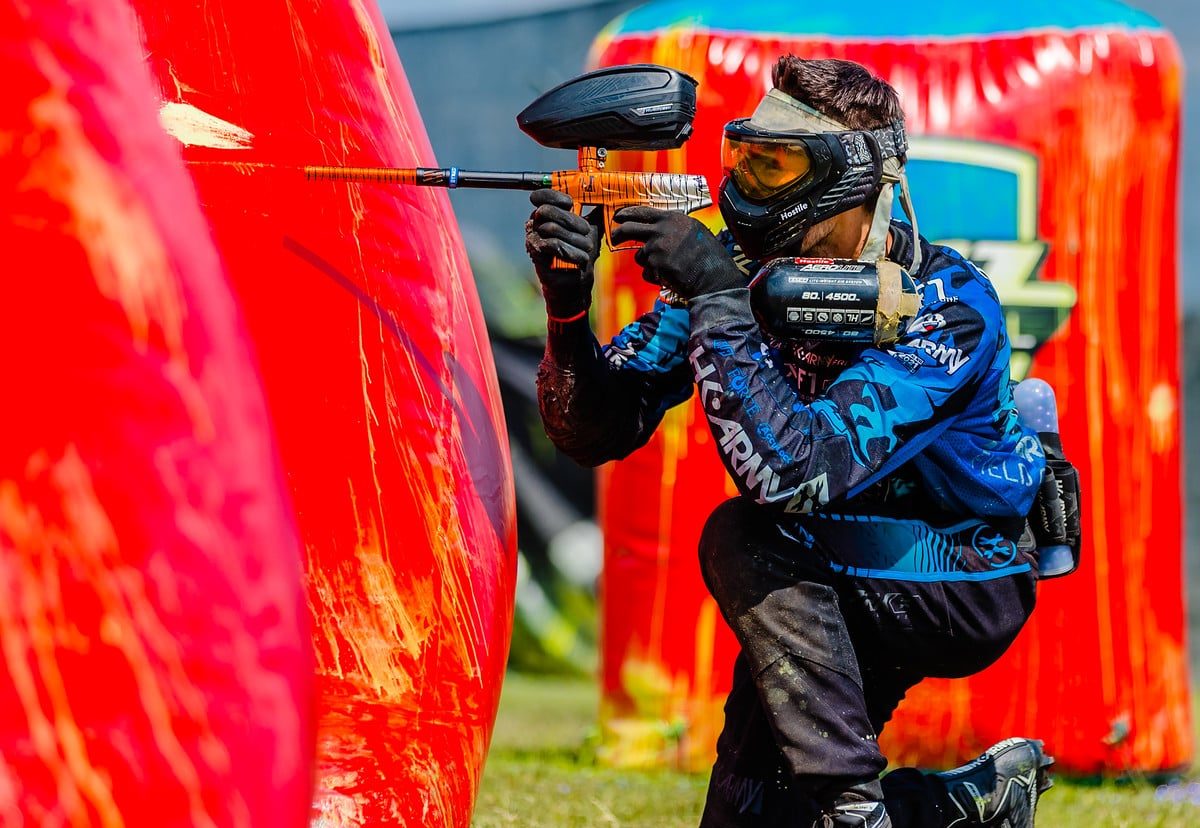 San Diego Dynasty has been the home to some of the greatest paintball players to ever play the game; Fragoza, Lang, Greenspan. But that conversation is quickly changing. Tyler Harmon is perhaps the most versatile weapon in the sport of professional paintball, and he has firmly cemented himself into every conversation about the best paintball athlete in the world.

Athleticism in the NXL professional paintball league is on a parabolic rise, and Tyler Harmon towers above the rest, both literally and figuratively. His unique combination of size, speed, body control, and elite marker skills makes him one of the most dangerous players on the field. Best of all, he has all the accolades to back it up; he turned pro at 14, has won multiple World Championships, and is the undisputed, undefeated World Champion in the ProTour 1v1 league.

I had a chance to sit down with Tyler to talk about event 1 of the NXL, the Sunshine State Open, as well as find out what Tyler has done to become unilaterally respected by every pro in the sport.

Looking Back on Event One of the NXL

At what point did Dynasty realize they were going to be missing a few key players due to injuries? Was it last second or did you have time to prepare?

Tyler: “We only had about two weeks to prepare for being down a couple bodies. Ryan hurt his back the weekend before the event which is obviously a huge asset to the performance of the team on the field. Blake had also been dealing with a knee injury since World Cup that we are diligently monitoring and we decided to play him up the middle to keep a lot of impact off his knee. We were definitely at a bit of a disadvantage with these injuries but feel that we still had all the pieces we needed on the field to get the job done in Florida.”

This was the first event in a long time that Ryan Greenspan wasn’t on the field, how did that effect Dynasty?

Tyler: “Not having Ryan on the field is always going to be a huge loss for the team as he is one of the most versatile players to ever play the game. He’s a huge facilitator for end-of-game movement and is a beast at paintball so we definitely missed him out there. From what I understand the man is feeling better and should be all good to go for event #2.” 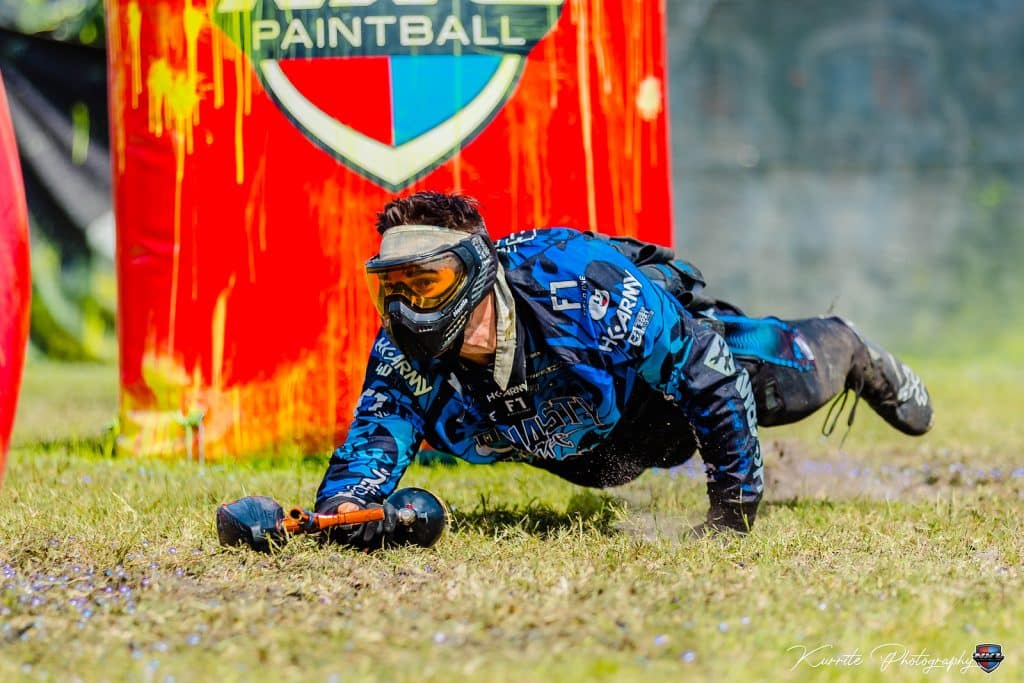 Gameplans and keeping emotions in check.

What was the feeling throughout  the team after a slow start on day one? Were emotions running a bit high, or was it all business in the Dynasty war room?

Tyler: “The feelings amongst the team were extremely performance driven and inspired after a slow start on day 1. We made some micro adjustments to where players were positioned and how we were going to play the game and had tremendous success from that point forward. The best teams and players in the world have their ups and downs and it’s up to all of us as individuals to bring our best in every moment. There were definitely some high-tension moments throughout the weekend but that’s just due to the fact that we have a completely different organization than we did just a few months ago at World Cup. We are constantly experimenting with exactly how to put all the pieces together to provide the most success possible for the team. ”

If you could go back in time and change one thing about the Dynasty gameplan for the Florida layout, what would it have been?

Tyler: ” I think the only thing I would have changed about the game plan that we had set for event #1 on Sunday would be to unleash Blake up the middle and have him be the aggressor instead of trying to lure the other team up the middle so we could shoot them coming into our side of the field. When we are the aggressor it provides unique opportunities for our players to make moves off of Blake and more times than not Blake is going to eliminate a couple of the opposing team players because he’s such a monster when we let him off the leash.”

New Faces in the pits.

Dynasty saw the departure of long-time coach Rusty Glaze; although he was replaced by a familiar face in Kevin Bredthauer. Has he been able to step into the role of head coach pretty seamlessly? And, how does his style differ from Rusty?

Tyler: “We will always hold Rusty close to our hearts in the Dynasty family and cherish all the amazing knowledge he brought to the team on how to approach the game. Skinny(Kevin) has done a tremendous job of stepping in and filling the role seamlessly. The dudes on the team want to win for Kevin the same way we did for Rusty and I know we are going to have a bright future with SK at the helm.

Kevin is extremely smart and very in tune with the team and will only get better and better as the months roll on. There are many similarities to the way that Rusty and Kevin approach coaching Dynasty but at the end of the day their main job is to give us good information so that we can go out there and get the job done. It’s up to us as players to put the team on our back and get the damn job done! Coaching an organization like Dynasty is no easy task but I have the utmost faith that Kevin is just the man for the job.” 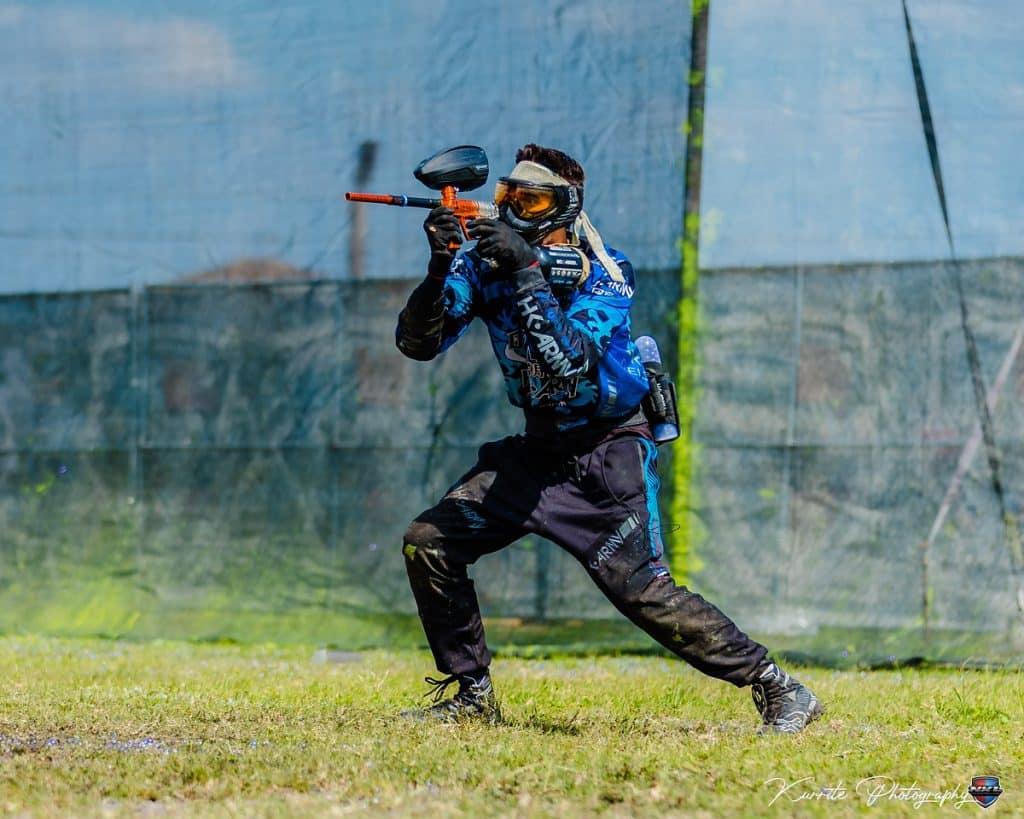 A Tiger keeping his claws sharp.

You are seen as one of the top players in the league in terms of individual skill set, what do you do to stay so sharp after all these seasons in the pro division?

Tyler: “I’m a freak of nature when it comes to my body size and style of play so I think that plays a huge role in my unorthodox skill set as a paintball player. I’m 6’2 which gives me a huge range of motion when I get into a gunfight and I’m able to navigate many areas of a bunker with rapid speed which is highly effective at winning gun battles. I eat, breathe, and sleep paintball and work diligently to be the most athletic version of myself possible for the Dynasty organization. A typical week for me consists of countless hours in the gym, co-hosting the “Play The Game Podcast” with Marcello Margott, and working on all of the fundamentals of gunfighting at one of my local paintball fields here in Arizona. I’m always doing something to keep myself dialed in and ready for Dynasty team practices and NXL events. I’m in love with paintball and so grateful to be able to live a full-time-paintball life!”

With event two quickly approaching, it will be exciting to see this new Dynasty core continue to develop with Tyler as one of the feature players in the starting lineup. You can catch Tyler on his show Play the Game Podcast to get more insight into his career and life.

Special thanks to Kurrite Photography for the photos.