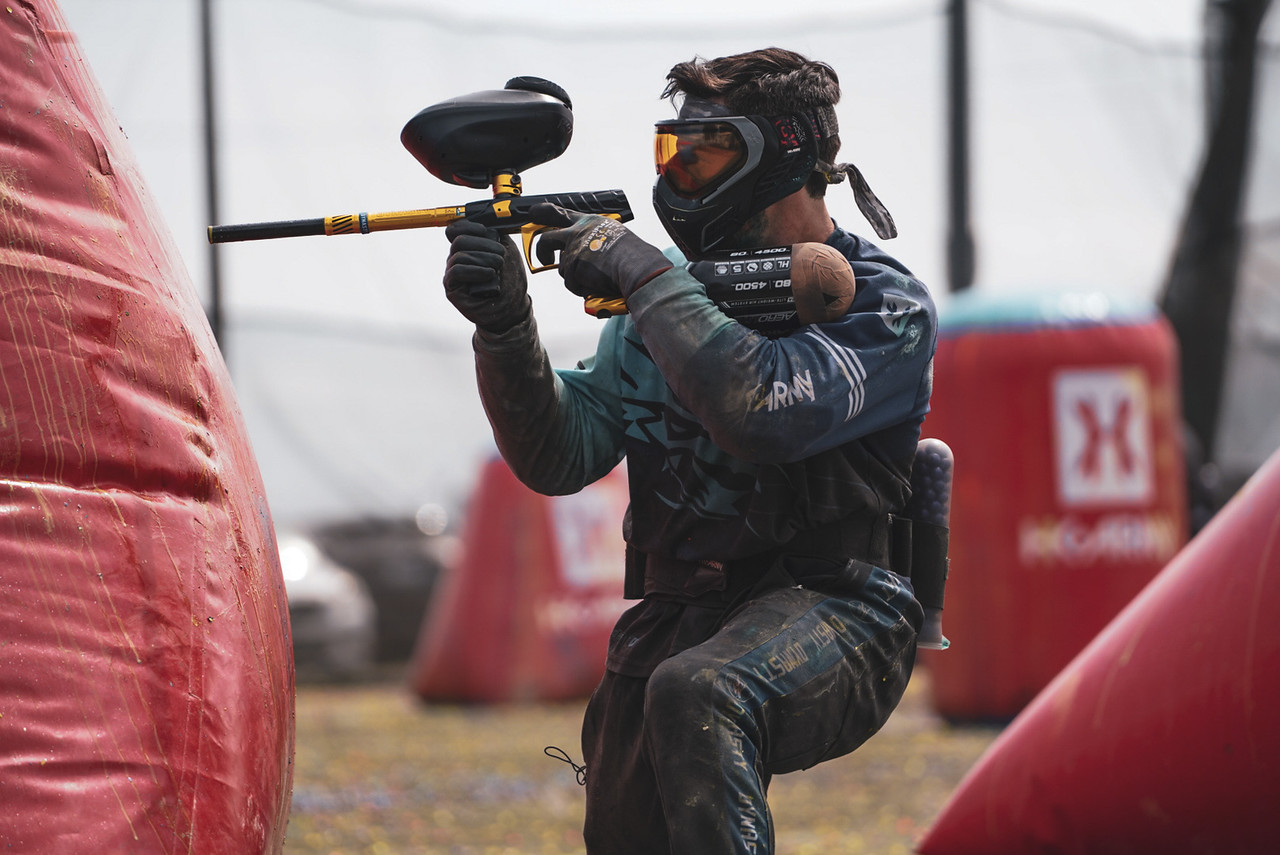 For years, Grayson Gladstone has been lighting up video clips across Youtube and social media with his aggressive style of play and big moves on the paintball field. It was only a matter of time until a major professional team noticed. For Grayson, that team just so happened to be the best in professional paintball history, San Diego Dynasty.

Grayson has taken every step on his path to the pro league the proper way. His optimistic and positive approach to the sport intertwines with an intensity and passion that has made him one of the best first-year professional players in the National Xball League this season.

I talk with Grayson as often as I can and I had a chance to discuss his recent 5-man win and Top-8 finish in the 10-man events at the Iron City Classic with Dynasty. We also discussed his rookie season in the professional division of the NXL and how he is handling his first year as a pro player.

This was your first event playing for Dynasty in the classic paintball format. What was it like playing with so many retired legends mixed in with the current Dynasty roster like Davey, Glenn, and Rodney?

Grayson: “You also can’t leave out Tyler Michaud, Erik Hunter, Andy Kopcok, and Roy Richard. It felt like I time traveled to a different era of paintball. All of the legends showed that they still have a competitive drive, have their timing to make moves, and know how to win. These guys want to come out and have fun, but they’re still going to get aggressive and take it to teams. ”

I got to see you get used as a “secret weapon” on some of the fields for Dynasty. One game in particular on the mounds field, I watched you eliminate almost half the team in less than a minute. How did it feel to get that level of trust from the Dynasty legends and captains? How do you think that will translate to the Xball field?

Grayson: “The weekend got off to a great start from the first moment. I showed up for our 3rd 5-man game off of a red eye flight, go to the mounds snake off the break, and started eliminating players. I spent most of my weekend running far and working with the team to close out games. In terms of how that will help in xball, the game slowed down enough to see what some of my teammates mindsets were in high-pressure situations, I now have a better understanding of what they want to do, and when. The goal is to continue being a thorn on the field, no matter what the format is. ”

How did you have to change your approach for some of the more unique fields at Urban Assault like the Hybrid field and the Woods field?

Grayson: “What’s particularly interesting about the woods and hybrid fields, is that we had to change our game plans quite a bit based on what side we started on, the sides aren’t even close to being mirrored. Going into matches, we had to have two different game plans set that would change personnel and point of attack. Hybrid was my least favorite field again because even if you get great positioning, it was still easy to lock up. The woods is fun because it was able to be won from all three parts of it. Naming a bunch of stick piles and remembering the names mid-game was a bit of a challenge in itself though. ”

Out of all the retired pros and legends you got to meet at ICC and watch play, which one do you think still has enough gas left in the tank to play pro in the current NXL format?

Grayson: “Davey Williamson for sure. He’s still just as fearless as he was back in the day and does everything he can do to pull out games. I’d bet he’d get eliminations off the break, snap people out, and get some bunkering done to this day. ”

What are your thoughts on the markers and technology in the mech paintball format? It seems that each year the markers are getting faster and faster. Do you think this sort of speed war is hurting how classic paintball should be played, or do you embrace it?

Grayson: “I knew the markers were getting faster, but had no idea there were walkable triggers now. My generation of paintballers just get markers out of the box and go play. The speed war in mech is bringing back a tinkering and upgrade scene that has gotten a bit lost from the sport. The markers doesn’t have eyes either, so even if you can shoot fast, you have a higher risk of chopping paint. Risk/reward per say.”

The First-Year Pro has Shined.

What can you credit as the biggest reason for your ascension to the pro league? You always stood out to me for the smart, methodical style you play with, and a knack for making huge moves. How did you get to this point?

Grayson: ” Surrounding all aspects of my life around paintball. It motivated me to be mindful of what I put in my body, be in athletic shape, and always leave time to both watch and play as much paintball as possible. If I received criticism, I used it to help me grow, and I never let rejection stop me from pursuing the dream of playing professional paintball. There are definitely some mentors that were always around to provide me with advice and guidance on how to progress that I have to thank too.”

You got to make your pro debut with one of the greatest teams of all time in San Diego Dynasty. How was that experience for you and what work went into earning that spot?

Grayson: “I’m still in a bit of shock that I made it on the best team in the world. It is truly a dream come true and now I’m trying to make the most of the opportunity I’ve been given. As far as the work that went into it, it was a constant hunger to not just play paintball, but get better too. Watching as much GoSports as I could when away from the field, warming up every practice with fundamental drills, playing against players that were better than me, asking those better players questions, and playing as many tournaments as possible. When it came to playing paintball, there was never an excuse to not put in the work.” 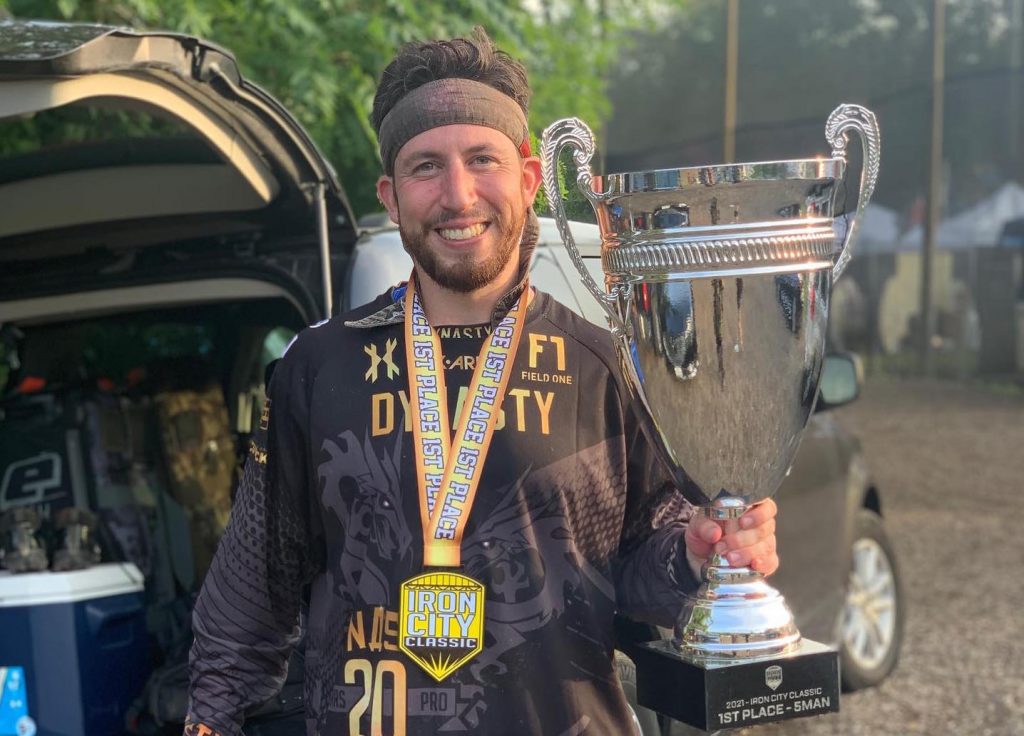 I will continue to watch Grayson with a focused eye as he blazes his own trail through the pro division. His dedication and love for the sport is evident everytime we talk and I believe he is quickly on his way to becoming one of the premiere attackers in the professional league along with his teammate Mike Urena on San Diego Dynasty.

You can catch Grayson playing at the next NXL Event in Chicago with Dynasty on the GoSports Live Stream on September 17th-19th.