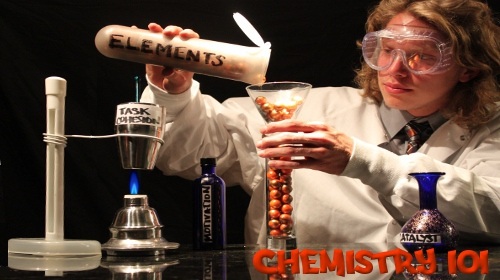 With the right ‘Elements’ you can find ‘Catalyst’ whose interactions provide added ‘Motivation’ for your team. Mix it all together and you just might get a high level of ‘Task Cohesion’. Say What?  PRO Paintball identifies good team chemistry in Part 2 of our five part series, Anatomy of a Pro Roster.

We are presenting this information from the standpoint of those individual(s) who are responsible for putting a Pro roster together. However individual players and divisional teams who have the goal of reaching Pro should take these points to heart.

Rest assured that somewhere, someone is busy building the perfect paintball. You however have been given the charge of assembling a Pro roster. Unlike your paintball making counterparts, the ingredients you seek do not come in a box. While they both can involve trial and error, the chemistry of a team can be fluid and subject to change.

Gone are the days of handpicking players from around the country. While there are a few players who fly around to play for a given roster, monetary considerations have made them a rare breed. Rather, you’re core is going be more localized. So you look at whose skill level and experience will best suit the needs of your team.

But there is something else. You know from experience that in sports, chemistry is a key element to a team’s success. What can raise the odds for success in achieving the ever elusive ‘good team’ chemistry? To answer this question, we must first have a definition of what it is.

To begin with, we generally think of chemistry as something a team either has or it doesn’t. In reality, every team has chemistry; it can range from one that favorably enhances performance to being downright detrimental to it. Either way, there is a dynamic in play.

When sports psychologist refers to chemistry, they often address it by the more formal phrase, ’level of cohesion’. According to one leading sports psychologist, team cohesion is “a dynamic process which is reflected in the tendency for a group to stick together and remain united in the pursuit of its goals and objectives”.

When building a Pro roster, remembering which cohesion is most tied to performance is important. Within paintball circles, many might feel that social cohesion is the key to success. Other may not really be aware of just what task cohesion is. So let’s talk about that these for a minute. 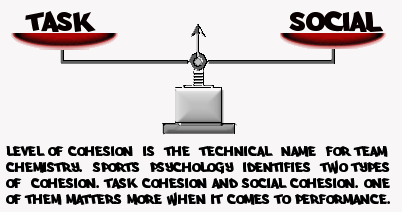 Task cohesion is the level of effectiveness your team displays when performing as a unit on the field. It can include games, practices, clinics, and any assignments that are part of the team’s norms. While good task cohesion is NOT a guarantee of success, it greatly increases the odds.

Social cohesion (or chemistry) is how your team functions outside of performance activities. These would include degree of friendship, hanging out, what interest they have in common outside of paintball. Study after study has shown that social cohesion is not an indicator of successful team performance.

What is important is that players are united in their drive to accomplish established team goals. Whether teammates like each other off the field takes a back seat to working shoulder to shoulder on the field. The setting of specific team goal has been identified as a key in developing task cohesion.

When Chemistry is Threatened

So while skill sets and talent potentials are important, how a player contributes toward the team’s cohesion is just as important. An example would be if you ever had a player who just mentally falls apart when things get tough. Yelling, shouting, assigning blame. In effect, generating a negative vibe during a performance.

You know how detrimental and generally speaking in those moments your reminding yourself this WILL be addressed when calmer heads prevail. If such interaction is prevalent, the team’s chemistry will suffer.

Often such a player genuinely believes that such input shows a genuine concern for his team and just how strong his desire to win. Such negativity however can result in the team losing sight of its goals.

As a coach, it was your responsibility to have given sufficient review of this player’s character tendencies and demeanor. Whether you were fully aware or not, it now has to be handled in a manner that reflects progress. Otherwise the team will not find that ‘sweet spot’ to good chemistry.

One of the most successful Professional soccer managers of all time was Sven-Göran Eriksson. He wrote a book(1) on the psychology of football (soccer).  Eriksson showed having a   ‘we’ mentality can raise the performance of all the players in a team and help reduce stress when under pressure. In his eight key attributes of the ‘good team’, it is noteworthy that all eight involve task cohesion:

Clearly, Erikkson’s list emphasizes the ‘we’ concept. All eight have a phrase that denotes team, not individual. It takes effort to really apply these tenets.

There are a number of ways that a player can gauge whether his thinking and the team’s chemistry are on the same page. Here are four(2) positive, necessary views everyone should have. These are points that each player should work to incorporate into his “skill set”.  If each member does so, then the team’s task cohesion will rise.

during competition and practice.

There will be times of intense exchange. Paintball is an intense game. Players can and will have personal goals. Regardless of internal or external influences,  the motivation to win as a team is what drives good team to be a great one.

As a coach and/or owner you realize that your teams chemistry will have a direct bearing on performance. What are some ways YOU can help to build a strong foundation? Well, we’ve talked about how important task cohesion is to a team.

However, you do NOT want to overlook the friendships that each player develops within the team. While social cohesion is not the most important, that doesn’t mean its not important.

So to help manage both sides of your team’s good chemistry, here are five points to consider for incorporating into your team interaction:

So we see that team chemistry is much more complex than it might appear on the surface. Most teams are playing fewer events in recent years. The challenge to build good team chemistry takes even more diligence. Certainly what we’ve covered does not address the entire scope of building good team chemistry with a Pro roster.

It does lay out some basic principles that owners, coaches, and players can strive to work with.  With the concerns surrounding the stability of several Pro teams, now is the time to work at and hone your skills.  Being ready so that when opportunity rears its head, you find yourself well positioned to be an integral part of a Pro roster.

Check back as Anatomy of a Pro Roster continues with Part III. In it we will take a look at Demographics: Where do the players come from?