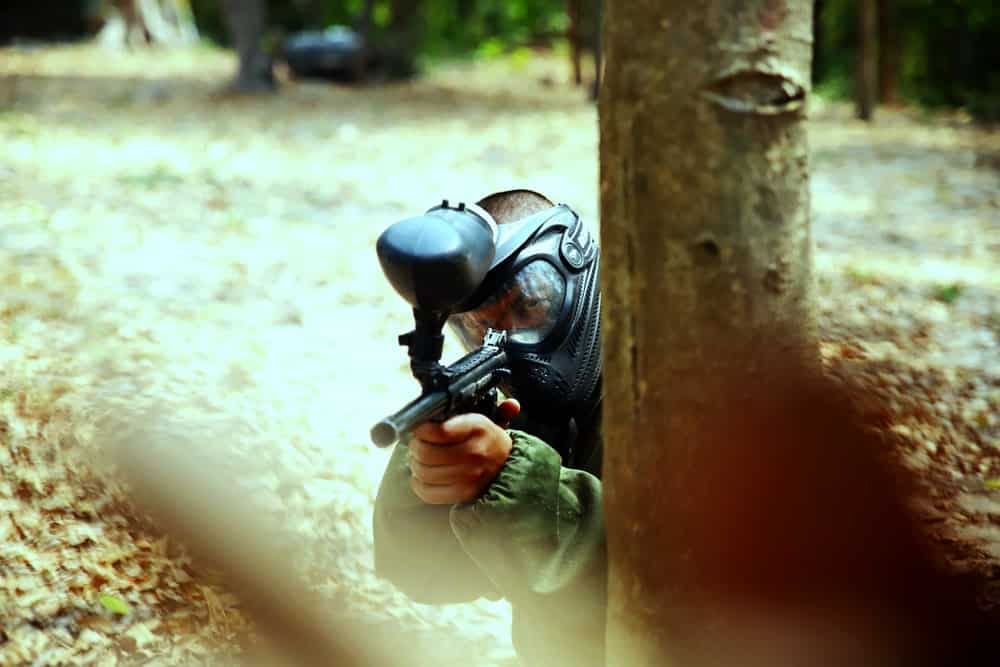 Whether you are a veteran or new to the paintball community, you will run into products from the Empire Paintball company. One of their most popular options for paintball markers, the Empire Mini, has seen two upgrades where the technology has seen noticeable improvements from the GS version to the new two-piece barrel model. However, our Empire Mini GS review will focus on the latest one and what it brings to the table in features, design and performance.

The new Empire Mini GS Paintball Gun with Two-Piece Barrel is the second iteration in the Empire Mini line with improved features that tournament players and beginners approve. The advancements in the offerings, design and performance of the electro-pneumatic paintball gun mean no trigger issues, better handling, robust construction and easier maintenance.

The key features in the Empire Mini GS Marker include the extended two-barrel system that adds two inches to the previous model. The longer paintball gun is also ready to shoot out of the box since not much preparation is required. Additionally, the firepower is impressive and can deliver up to 275 FPS as soon as you unbox it, and practice can help improve this rate.

If you pair them with a 45/4500 high-pressure air tank, the paintball guns can offer better performance. Aside from improved operation, the tank will let you fire about 100,000 paintballs before it runs out. In addition, the tank capacity is better than the old Empire Mini.

The sturdy aluminum frame and barrel construction make the Empire Mini GS Marker a durable option for a primary or secondary go-to. So, the piece sets you free to pursue your enemies with vigor as you are not likely to replace these paintball guns soon.

Moreover, the clamping feedneck secures the hopper firmly when you attach it. Consequently, do not stress about snapping it off. Plus, the aluminum build makes the entire piece solid and lightweight.

The rubber grips on the Empire Mini GS are more robust than the original Mini. Hence, this grip attachment will not deform its shape while using it, ensuring the frame remains sturdy.

The On/Off ASA switch adds simplicity to the Empire Mini GS Marker, making tank removal and placement quick. Consequently, you do not need to pause the game to change your empty tank.

You will get a battery, o-rings, Allen wrenches and a barrel sock when you buy the Empire GS. Additionally, you can use the Allen wrench to tighten or loosen the screws and the spare parts for replacement. Finally, you can find detailed instructions on how you can disassemble the marker, making maintenance extremely easy. Thus, the Mini GS Marker is excellent if you are on a learning curve.

The tactile feedback of the trigger feels better than other markers because it helps you become an efficient marksman. Also, the click sound produced makes shooting more intuitive, especially for a beginner. Eventually, you will be able to feel each shot when you pull the trigger as you add some instinct to the game.

The small frame of the Empire Mini GS, coupled with the ambidextrous build, makes the little marker ideal for either left or right-handed users. Although the compact design complicates matters for people with large hands, the rubber front grip makes it easier to handle.

Use the Empire Mini GS to achieve tremendous success thanks to the longer barrel, making your shots more accurate. In addition, minimal recoil produced by the paintball marker does not significantly affect your aim.

Aside from the micro-switch trigger, this paintball gun hardly makes a sound when you fire it. So, you can indulge in stalking your enemies and firing at will without worrying about being heard and spotted. Also, the clamping feedneck allows you to reload the hopper quickly without stressing over breaking the gun.

The LED indicators found on the backside of the front rubber grip give you information when selecting the multiple shooting modes. Admittedly, unless you are at least an intermediate player with plenty of experience, the lights on the gun might be confusing at first. However, you can toggle between the different modes using an OLED Redline board.

The Mini GS Marker utilizes the ASA On/Off switch feature for quick replacement of the tank. Once you flip it off, the ASA regulator will allow air to bleed, readying the tank for removal. When turned on, it will lock the tank in place and send air to the paintball marker. Since most paintball guns at this price point lack this feature, this Empire model offers more bang for your buck.

The Empire Mini GS Marker is one of the most sought-after paintball guns on the market, thanks to the affordable price point and combination of valuable features. As mentioned above, the new design will help improve your accuracy, prolong the life of the gun and ensure it is easy to use and maintain. Thus, the Mini GS should be at the top of your buying list if you want to save money while getting top-notch quality.

1. Which is better between the Empire Mini GS and the Empire AXE 2.0?

The Empire AXE 2.0 is much bigger and comes at a higher price than the Empire Mini GS. However, the size difference makes the latter model much easier to hold and handle because it offers more room in the grip frame. Plus, you can remove the bolt from the AXE with the push of a button, unlike using screws in the Mini GS. Nevertheless, the Empire AXE lacks a gauge to let you know the operating pressure. Consequently, it may not be friendly to beginners.

CO2 tanks contain a liquid that can negatively affect the internal components of the Mini GS, like the solenoid and internal seals. Therefore, the manufacturer recommends combining a reliable HPA tank and hopper to get the most out of the paintball gun.