Anatomy of a PRO Paintball Roster 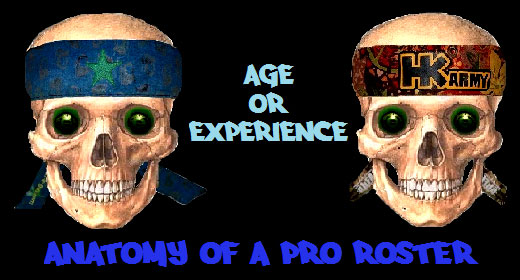 Anatomy of a PRO Paintball Roster

. . . is not an exact science. There has been innumerable approaches to putting them together. There are some tenets however that have withstood the test of time. Some of these aspects have garnered more attention than others. Pro Paintball takes a look at five key components that make up a successful Pro roster. They are Age or Experience, Chemistry 101, Demographics, The Money Man, and Putting it All Together.

With the economy exuding so much influence over paintball, each of these categories could include some aspect of finances. This being the case, we will discuss the key role of money primarily in the installment entitled, “The Money Man”. The objective is to give some insight into what the numbers say. There are many reasons as to the ‘why’s’ of each subject. With the exception of the Money Man, however, we will delve into the what it is, not so much why it is.

To begin with we’d like to try an experiment. Listed below on the left hand side are four Pro teams average age. To the right are four random standings in the Pro Division of the PSP. See if you can match the correct average team age with their current ranking. (You can check your answers with charts below). 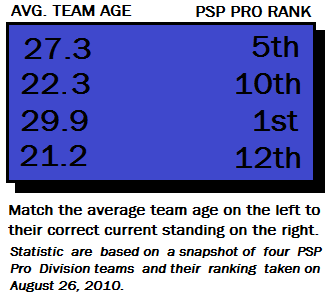 The chart above leads to our FIRST dissection of a Pro roster. In the past teams have been top heavy with older players. In more recent times, a shift to younger players began filtering into programs. A few teams have ventured into talent heavy young rosters at the Pro level. The fact of the matter is, in most successful programs there is a mix of both.

Still, there are some misconceptions. What really IS the average age of a Pro player? Are there any correlations between a team’s average age, their collective level of experience, and how they should be expected to perform? In other words, when building a Pro roster what matter more. . . .

Age or Experience
The above chart is certainly not a mandate against a roster composed of older players. It does show us something however. Namely, age does NOT dictate success. At 22.3 average years of age, Edmonton Impact has led both leagues Pro Division for most of the 2010 season. Tampa Bay Damage has been in four finals from both leagues this season. They average just less than 23 years of age.

If we go back and look at the average age of Pro Players we find it is an average of 24.32 years of age. Some feel an older, more mature roster is the way to go. There are circles within paintball who feel the youth movement into Pro ball that begin taking place around 2005/6 has hurt the Pro game. But really, the move was the beginning of teams facilitating better athletes. Tournament paintball has moved away from huge bunkers where literally three players could play behind.

In reality, most Pro teams keep an eye out for young talent. Why so? Front players and in particular snake players play the most physically demanding spot on the field. Diving, sliding head first and crawling over and over again is not something you see many 25+ year olds doing as the primary snake guy. It takes a toll on the body. So you see younger players filtering in at this position more than any other. The older and more experienced players tend to play behind them.

To answer the question as to what we can glean from comparing age, experience, and actual rank, Pro Paintball has prepared the three charts below. Take a look at the Ranking when based on a team’s average age compared to the average level of experience. 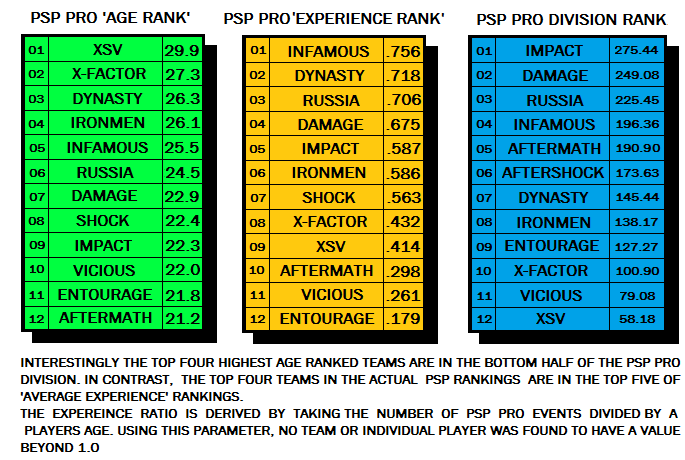 Now at this point no doubt, someone’s ire is being raised about how it’s more than that. But unless the 19 year old has character issues or can’t play the needed position, he’s getting the nod over the other guy. Factors such as chemistry and in our current environment (for some teams) the ability to pay their way is given consideration. We will talk more about this in the Money Man segment.

It is noteworthy that several mid-twenty and over players have taken over spots on Pro rosters. Out of the 113 Pro roster spots used for the MAO (there can be as many as 120), 32% or 36 players were classified as Semi Pro or lower. Of those 15 are 21 and under. A few of the remaining twenty-one players are building their classification, while others have Pro experience but not recent.

This article is dealing with numbers based off of the Race To game, yet there is other Pro experience. A good number of PSP Pro player have had experience in the seven man format (NPPL). While the format is different, these players still chalk up games in the highest level of the NPPL’s format.

While it does add weight to a veterans experience level, there is no one database to quantify those numbers. A case in point would be Entourage. This team had six of their nine rostered players at the MAO who were 21 and under. Yet, several have two or more years playing Pro in the NPPL.

So experience is the more important indicator in assembling a Pro roster. The subtle difference between ‘age’ and ‘experience’ is similar to ‘speed’ and ‘quickness’. In paintball, we tend to talk about a players speed, but rarely does it factor in. The overwhelming majority of runs (be it a run through or a deep break) are under 14 yards. We could break out the stop watches for you ‘14’ time, but that’s not speed, its quickness. First step explosion has even more meaning in such short burst.

In today’s environment, owners and coaches are taking harder looks than ever before at their roster. With the attrition of numerous Pro teams and the eliminating of even some divisions (such as Semi Pro) there are a lot of Pro classified players without a home. This new market may very well slow down the youth movement and there is evidence that it already has.

Regardless, the Pro Division is very much a young man’s game. There is a long, long list of former Pro players who have stopped playing in the last three years. Will the trend move toward more experienced players looking for a team? Or will decision makers continue to bring in young players, getting Pro experience early? The jury is still out on that question. Either way, experience will be the leading factor.

There is another element essential to a solid Pro roster. It goes beyond experience and it’s one of the more difficult assessments to make. In our next installment of Anatomy of a Pro Roster we break down where skill meets unity as we step into the ‘lab’ for Chemistry 101. Stay tuned for part 2..