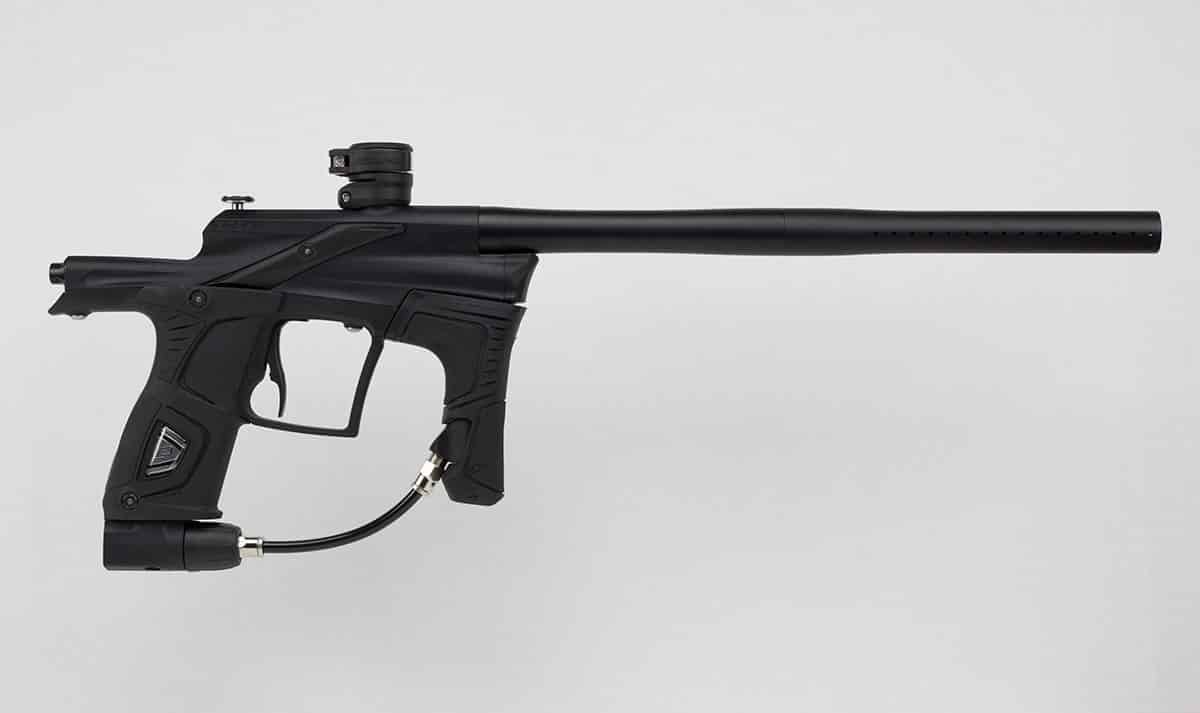 There were two thoughts that came to mind when I first saw the Etek 5: “It looks like an LV1,Making the Etek 5 look like an LV1 does two things: it creates brand continuity, and allows people who can’t afford an LV1 the chance to pretend they have one.

From a distance, it would be very hard to distinguish Planet Eclipse’s Etek 5 from the Ego LV1. In years’ past, the Eteks were very hard to differentiate model to model. But now finally, Planet Eclipse has made a huge design leap forward in its Etek line. Visually the Etek 5 looks much different than Eteks of old.

Before the Empire Axe hit the scene, the Etek dominated the mid-level market. If you wanted a great gun at an affordable price, there was one option: the Etek. Then came along the Axe, and within a few months the Axe was outselling it. Over the past few years, Etek sales have fallen flat: it was beaten by a superior gun. The Etek’s drawbacks? It was loud and hard on paint.

The Etek 5 is Planet Eclipse’s answer to Empire’s Axe.

In order for Planet Eclipse to compete with the Axe, they had to create a gun that could handle fragile paintballs, is quiet, reliable and affordable.

Previous Eteks were known for not being able to handle today’s highest end tournament paintballs. The Etek’s high bolt acceleration would just smash fragile paintballs in the breech. By adding the LV1’s Zick 3 kit, Eclipse has created a much more controlled bolt acceleration. Rather than the bolt firing at full speed, it now gradually accelerates, making it much softer on paintballs. The addition of the Cure 5 bolt, with soft face bolt from the LV1, also makes the gun a bit gentler on paintballs. Along with the rammer and bolt improvements, there is also a larger valve chamber allowing for a lower operating pressure of 150 PSI, compared to the Etek 4’s 185 PSI.

The first requirement was for Eclipse to create a gun that could handle fragile paintballs, and they have done that. To test this, I got 1000 Evil paintballs, set the gun on semi-auto, set the velocity to 285 FPS, and went to town. After shooting the 2 bags of Evil, we only got one break, and were able to shoot though the break fine without cleaning the barrel or gun. With high-end tournament-grade paintballs, breaking a few is not uncommon, and our results would have likely been the same with any of the high-end guns on the market.

The original Eteks were cannons. At least they sure sounded like it.

Eclipse solved the cannon problem by increasing volume of the valve chamber. By adding more air to the valve, the operating pressure could be lowered, creating a quieter shot. The lower pressure makes a huge difference. While the Etek 5 is quieter than the Etek 4, it’s still a bit louder when compared to guns in the same price range. The Axe and Reflex Rail are still both quieter. The Etek uses a large volume of air to fire, but a lower pressure, making its efficiency pretty good. On a 68/4500 compressed air tank, I was able to shoot a hopper and 9 pods, so around 1500 shots or so.

Ergonomically the Etek 5 is totally new. The low-pressure regulator has been moved inside the body, and the distance between the trigger frame and front regulator/foregrip is much larger.

The lengthening of guns has been a trend in paintball lately. Longer guns allow for a more stable shooting platform, aiming, snapshooting, running and gunning all come more naturally. The Etek redesign follows this cue. Planet EclipseI personally have found I’m much more comfortable to hold the regulator lower. But the wider spacing from the trigger frame to foregrip does make the Etek 5 feel much better, and not as cramped.

Planet Eclipse took care of the three big areas: sound signature, handling fragile paint, and ergonomic design. Affordability and reliability have always been givens with the entire Etek line. And so now with these upgrades Planet Eclipse has reemerged as a potential top choice in mid-range priced paintball guns.

The Etek 5 is better than the Etek 4 at everything. Eclipse solved all the complaints that people had with the Etek 4. The Etek 4 was good, but the Etek 5 is great.

The Etek 5 is now quiet and easy on paint, while still being affordable, reliable and air efficient. It’s great for the player who’s looking to upgrade from an entry-level gun but doesn’t have the budget for the $1000+ super guns.

Does the Etek 5 compete with the Axe? Yes. Now with the Etek 5 on the market, your decision of which mid-level gun to buy just got a bit harder. I still prefer the way the Axe shoots, but now, I prefer the way the Etek 5 feels. If you are in the market for an Etek 5 or an Axe, I would recommend trying out both of them before you buy. Stop by your local paintball store or ask a player at a local field to try theirs out.

Review by Brad Johnson of PredatorPB.com