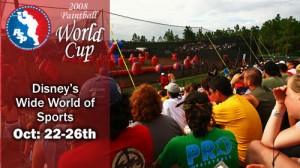 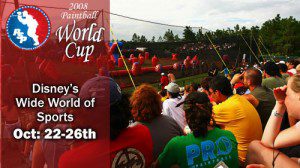 The event of the year that every player waits for from the moment the previous seasons Cup ends. One full week of everything paintball has to offer, on the grounds of the “Happiest Place on Earth.” Spanning a Wednesday-Sunday of the never ending emotional roller coaster that every player rides, this event is by far, the best. This year we look forward to the much anticipated PSP Webcast by Matty Marshall.

To start things off: Brandon Mayo (returning from duty with the armed forces) was set to play with X-Factor for World Cup 2008, unfortunately for them, he decided not to show up last minute. What a bummer!

Read on for the final scores, drama and learned who came out on top at the paintball world cup.

After the amazing run from Tampa Bay Damage just hours from their homes, they came upon a speed bump: Infamous! The boys from California came to Florida to put the hate on just about anything and anyone on the other side of their guns.

Our team at World Cup came across both new, and clearly amazing loaders – have a look for yourself.. 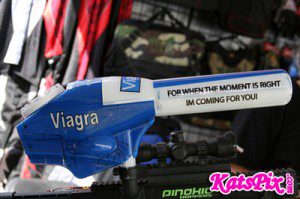 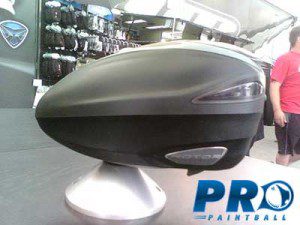 When the qualifying had relegated that a few teams pack their bags, three teams were left to fight it out with the seasons top seeds. 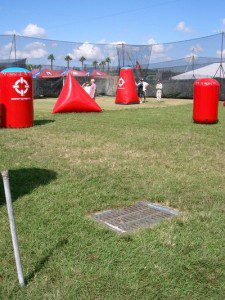 Seems that they have yet to fix the same issue that’s been every teams complaint since…yea the infamous storm gate:

Sources have informed us that there is a projected Dye Gun code named NT9 will be released come Huntington Beach 2009. We will release more information in the coming weeks.

The PSP is in talks for serious changes for the 2009 season. Officials met over the past few days and discussed anything and everything regarding next season. They’re currently in talks of a dress code that inhibits players from wearing any gear other than that from those that are directly sponsoring the league.

Activision’s NPPL Breakout 2009 Official Trailer. Official release date has been pushed back to the week after NPPL San Diego, official demo will take place at the event.

NXL Semi-Finals have come down to this:

Impact vs. Ironmen & Russian Legion vs. Philly Americans – the Cold War revival.  Both teams stayed alive for 3 intense matches. Impact lost the first game, but came back to win in the second. In the third match they just managed to get themselves demolished, scores do prove it.

This weekend Bob Long released a new scenario gun, more of a machine gun, literally. Same weight as an M16, and the Military has plans of utilizing it in live exercizes. It features Marq internals inside of an M16 Carbine body, a detachable stock, and capable of barrel upgrades..can you say NXL mode on big game day?? 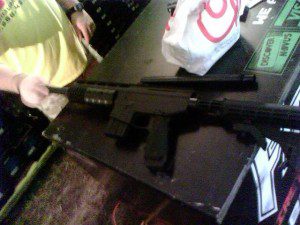 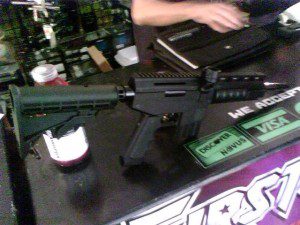 Millennium Series Organizers held a secret meeting Friday night. For the 2009 year they will require all gun manufactures to be financial sponsors of the league for players to use the companies markers. This comes to us from a very trusted insider. Updates forthcoming..

In Division 1 today Vicious came out strong with 7-0 and 7-4 finishes. Tomorrow they will play for 1st and 2nd tomorrow against Palm Beach Vipers. Apparently Troll has it out for Mouse, but we’ll have to see if his boys on PBV have what it takes to beat Raney, Mouse and Pauley’s Vicious.

The final day of our coverage and its come down to four teams in the top two: Ironmen, Philly Americans, Vicious and Palm Beach Vipers. In the Vicious PBV match, Troll got a major at 90 seconds, and Mouse got one at 85 seconds. Mouse’s major was pushed aside as Troll’s turned into a point for Vicious. Vicious playing with 4 bodies seemed unphased and managed to smash Palm Beach seemingly take home the first place.

Ironmen defeated the Philly Americans and became back to back NXL Season 2008 & 2009 Champions!