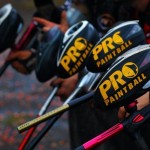 Todays pro paintball rumor report will be brief, and cut to the chase. There has been lots of paintball news flying around lately and we’re keeping you all up to date.