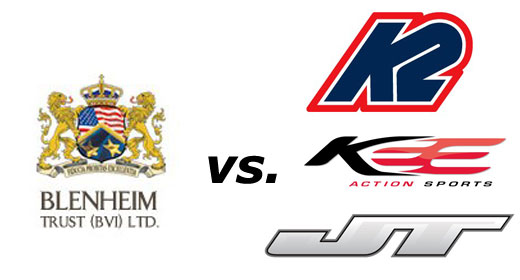 The Ford Report has reported the filing of a lawsuit against JT, K2 & KEE Action Sports by the Blenheim Trust (BVI) Limited. Broadly, the suit involves claims that the defendants used expired patents to inhibit fair competition and that they must have knowingly used those patents. (There’s a link to the filed documents at The Ford Report.) On one hand it might be seen as (paintball) business as usual. And, I suppose, to a certain extent that’s just what it is. What I find interesting is the involvement of the Blenheim Trust–and some of the language in the lawsuit.

Blenheim has no visible connection to PBIndustry. It is based off shore in the Caribbean and it provides a wide variety of what it calls post incorporation services along with a laundry list of other financial services.

The language of the suit–while not uncommon–leaves open the possibility of naming additional defendants as the process unfolds. In a related curiosity the suit names JT, K2 & KEE but there is no mention of Jarden despite the fact they are part of the chain of ownership that is alleged to have misused expired patents.

Now for the fun part. As a matter of pure speculation it appears that some element of PBIndustry has hired Blenheim to pursue this suit. (Here’s a couple more free guesses. Whoever passed the info to TFR is likely the interested industry party. Two, TFR will strenuously deny it, which is fine as it’s just a guess.) Is the action of Blenheim in filing this suit a matter of expertise or is Blenheim functioning as a blind? Whatever is going on it’s an intriguing change of pace, don’t you think?

Original story @ View From the Deadbox.