Today marked the opening of the PRO division in Aldie, VA, for the USPL DC Challenge event. 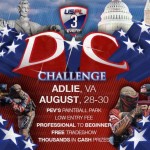 With the West Coast Open being only four weeks prior to this event, the question of whether or not this event would take place was floating regularly in the chatbox. The event is in play, the weather is overcast with high humidity and the crowed’s are looking thin on this Saturday morning.

With the morning underway, who do you think will come out on top today? Stay tuned right here to Pro Paintball dot Com to find out.

Hello Indianapolis Mutiny fans, we’re updating you live from the NPPL DC Open at Pev’s Paintball. It’s been a hot & humid end-of-summer weekend here in the Virginia swampland; players are dehydrated, paint is bouncing and everyone smells like they need a shower.

We won our first game against XSV thanks to some handy moves from team captains Aaron Tholey and Tommy O’Donnell with a 1-2 snake-dorito combo. Tommy went down the snake side highway to the 50 dorito and bunkered an XSV player on our side of the snake shortly after Aaron ran down 2 XSV players on the carwash side.

We lost our second game to Scottsdale Elevation in no time. They laned Adam Farej running to the snake; the refs then proceeded to pull a 1-for-1, even though no hits could be found anywhere on him. We started on the wrong foot and Elevation did a great job of capitalizing on our mistakes.

We lost our third game to Avalanche who scouted out our game plan and shot a few key players off the break. Once they were up on bodies, it was a battle of attrition. We expected a different game from Avalanche and got caught with our pants down.

We regrouped, changed our game plan and got back out to the field to play Oakland Blast. There isn’t much time between games, so action in the pit has been frantic.

Blast gave us a heavy gunners look, sending both Zack Long and Dave Bains out to the snake side with their guns up. Dave & Zack chopped up our runners and the pressure was on. They laned three of us off of the break. We fought back, but we were too many bodies down when they steam rolled down the field.

After the Blast loss we regrouped, got our heads together and prepared to play San Francisco Explicit. We opted for a more conventional game plan that kept our players alive off the break and both teams settled in for a gun fight.

Explicit were the first to take the car wash, but Tholey bunkered Explicit’s carwash to give us a much needed boost during the mid-game lull. We mopped up behind Tholey to keep ourselves in contention.

Both teams broke out aggressively and made it out of the gate with all 7 players alive. X-Factor pushed heavily up the carwash side, sending three players that way.

Dusty Odell in the carwash shot Adam Geis off the snake side before we realized he was into the 50. Smelling blood, X-Factor began pushing up the snake side  almost simultaneously.

Suddenly, bodies started dropping everywhere on the field. X-Factor sent three runners up the middle who were all shot out but took one of us with them. We traded a few more bodies back and forth until it came down to a 3-on-2, with Shane in the center stand-up, Tommy in the back center and Andy in the snake-side corner on our side.

Tommy got shot trying to make a move to bunker out the X-Factor player at the stand up next to the 50, leaving Shane and Andy in a 2-on-2. The X-Factor player moved from the stand up into our brick where Shane picked him up and gunned him down. Andy and Shane worked out the last guy to take us into Sunday as the 8th seed.

Thanks for all the support!

Readers; Who do you predict will win this event?! Leave your comments below!