Last night a rumor was started which indicated the NPPL and PSP paintball leagues had merged together. There was no meeting over the weekend in Pittsburg as some would have you believe. ProPaintball is here to set the story straight and give you an inside look at the process taking place.

Here is the most current intel on the NPPL/PSP discussions: while no official deal has been reached, both parties are taking the idea of a league merger very seriously and are working to make it happen. At this point, the leagues are more or less in an exploratory stage, with both sides discussing how a merger would work, rather than actually implementing any changes. If a merger were to be announced, it would take place after the 2011 paintball season.

Read on for a full update. 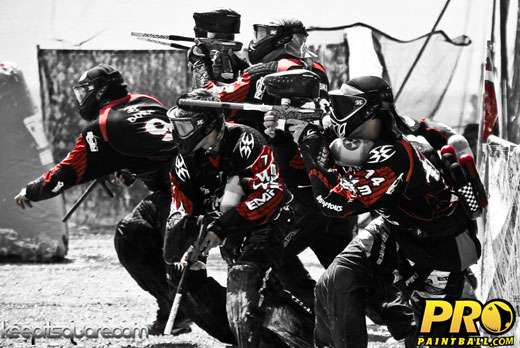 The NPPL and PSP met in Vegas a few weeks ago to discuss a potential merger. The first meeting was said to be very promising with both leagues making a major effort to see that the merger is successful. The NPPL was said to be discussing the meeting internally at the board member teleconference held on the weekend of July 30th. According to sources familiar with the matter, the meeting went well and both leagues are pushing forward with the merger discussions.

Whats the next step in the process? Representatives from both leagues will be meeting at this weekends PSP New Jersey Open and again at the NPPL DC Open. Meetings will be held to discuss, if a merger were to happen, how best to combine the two leagues. Topics that will be discussed include management, ownership, organization and format of the combined company.

By holding these meetings at the New Jersey and DC Open events, league representatives will have a chance to take a close look at the operational side of each league. This will provide a great opportunity for the leagues to discuss how the two entities can combine their respective companies to provide the best experience for the paintball community.

Players and industry members that support both leagues have complained for years that the cost of traveling and competing in/ supporting each league has been prohibitively expensive. If the merger were to happen, a combined national paintball league is thought to operate a total of 5 or 6 events (as opposed to the current 8 events now being run). ProPaintball insiders indicate that leagues are actively discussing options for rate of fire, coaching, and other issues critical to paintball players. The leagues have also been discussing how to improve the value and best support the vendors attending the paintball events.

In review; no merger has taken place. The leagues are still meeting to discuss possibilities and options. If a merger was approved by both sides an announcement would take place at the end of the 2011 paintball season.