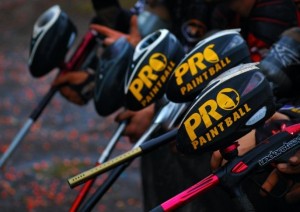 Central Florida Paintball Park played host to both Pro and divisional 5-man and X-ball teams over the weekend. Reports from the field indicated that over 50 teams were in attendance trying to fine tune their shots and game plans before the biggest pro paintball tournament in the world.

Thomas Mantoni and Frank Connell of the New England Hurricanes sustained injuries during yesterdays practice. Hopefully they will recover before their preliminary matches.

Word on the street is there is some shenanigans going down at PaintballUSA. According to information we read, Conquest Paintball Park recently had all their equipment stolen and subsequently the owners of Conquest were asked to leave the premises of PBUSA. The equipment had been stored at PBUSA. A group of Southern California players are calling for a boycott of PBUSA. For more information and background on the situation, check out the thread on PBnation.

David Cornell of Surge was seen trying out for LA Infamous over the weekend.

Rumor has it that Alex “Mouse” Goldman of SDA will be joining Oakland BLAST at NPPL Vegas next week.

Speaking of Aftermath, rumor has it James “Kekoa” Ferguson hurt his wrist during practice and Mike “Huey” Robles has joined Aftermath II.

Special thanks to Jeremy Doan for the excellent photo!