Gentlemen scientist Tom Kaye (Personal Website) recently popped up in the news. Tom was spotted on CNN’s International edition discussing an investigation that he and a group are leading into the identity of D.B. Cooper. Legend has it that a man calling himself D.B. Cooper (and dressed like a funeral parlor attendent) hijacked a plane flying between Washington and Seattle, received a ransom of $200,000.00, and disappeared into thin air. The D.B. Cooper mystery is the only unsolved hijacking case in American history. 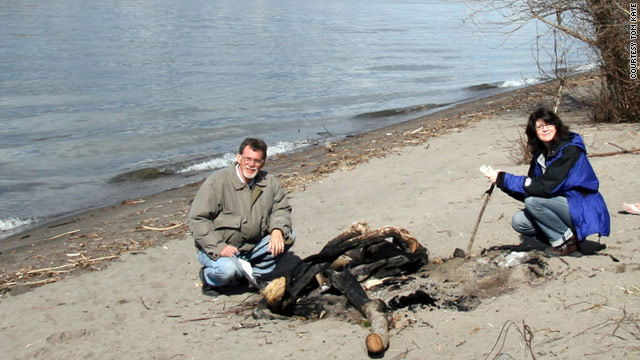 Seattle (CNN) — Scotland has the Loch Ness Monster, Roswell its UFOs, and in the Pacific Northwest there’s the plane hijacker on the run with a bundle of cash named D.B. Cooper.

Nearly 40 years after Cooper parachuted into the cold night air from a hijacked Northwest Airlines flight with $200,000 in cash strapped to him, the mystery man is still being pursued not only by law enforcement but also by an informal network of hobbyists and armchair sleuths.

Many of the self-deputized investigators have spent years if not decades searching for the man who on November 24, 1971, boarded a flight from Portland, Oregon, to Seattle, coolly told a stewardess he was carrying a bomb and wanted money.

When the plane landed in Seattle, he received the money and parachutes, let the passengers go and instructed the pilot to fly to Mexico City at low altitude. It is believed that he jumped somewhere over Washington state.

“It’s a chance to be a part of this case, part of history. It’s not the JFK assassination but it’s up there,” said Tom Kaye, who retired from his job running paintball manufacturing businesses to become what he describes as a “gentleman scientist.”

His retirement plans, though, shifted from looking for dinosaurs to tracking Cooper’s fading tracks.

Kaye is part of a small team of amateur investigators, including a scientific illustrator and metallurgist, that for three years has analyzed elements of the case evidence like the tie found on the hijacked plane that could have belonged to Cooper and some of the cash that he took, which was later recovered.

Read the rest of the article on the D.B Cooper Investigation at CNN International.

Prior to investigating legendary cases with the F.B.I., Tom Kaye was instrumental in developing both the industry and game of paintball. Tom’s contributions included the compressed airsystem, the automag, and pepper filled paintballs. In 1997, Tom was awarded a lifetime achievement award for his innovation and work developing the game of paintball.