Call it a Cupback: What force in our industry is powerful enough to drag ProPaintball out of the muck of obscurity..? PSP World Cup 2012. It really is that great of an event, and we’d be damned to let all of the epic matches, fresh equipment, and lowbrow shenanigans pass by without having a hand in them.  So this particular post is our “first act” of the comeback tour, with much more coverage to come over the duration of World Cup week. 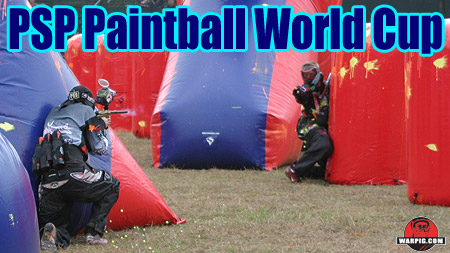 To truly appreciate the greatness of this colossal event (over 350 teams this year), one must look to the past. I’ve chosen two heavy hitting clips from Cup’s of yesteryear. Both are vintage-reserve, with extra grain(y).

Everybody who’s anybody remembers the greatness of Cup a-la Disney’s Wide World of Sports, and those who don’t remember probably spent too much time taking test-tube shots in Old Town. 720 Video (R.I.P.) put out a full length DVD covering World Cup ’04 that captures the on-field magic of paintball’s golden years (NXL) and the off-field anarchic fraternal-bonding that seems to have toned down over the years (Tweet us a pic of something from this Cup that can compete with the running suds fountain gag, and ya might win a prize). So get down with 2-and-a-half-minutes of ballsout bunkering, grab-your-Impulse-and-Classic-Timmy, flipped-ProFlex, neckerchief-good steez done only the way 720 could do it..

This second clip brings the hot and heavy heat; full-point match footy featuring the likes of San Diego Aftermath, Gridlock (GET IT UP!), and Diesel (pre-curser to Vicious) from World Cup ‘05. Break out your textbooks and take notes kids—this is PigTV Classics. WARPIG used to do event webcasts in low-res starting in 1997 (eat your heart out Paintball Access). Coincidentally, this event occurred on the heels of Hurricane Wilma, while this year we’re at the head of Hurricane Sandy. Questionable weather at a PSP Event, who’da thunk it? Take 10 minutes of your hotel time and treat yourself with this one..

ProPaintball will be in the thick of Cup mania all weekend offering up an all-you-can-eat buffet of content. Keep a look out for new product spotlighting, match commentary (including real-time score updates via Twitter), and day-of photo galleries from our suave photographer. Sound-off, kid!.. And give us a story or two from Cups gone’ by.

For the record, I got a Jefferson on Damage winning it all.