Team Destiny and Valken have hooked up for the 2013 season, and they’re excited about it. We’ve got the official press release below, filled with details on the sponsorship and information on both team and company. Check it out.

Team Destiny, a highly acclaimed paintball team based in the U.S.A. will be wearing Valken for 2013.  The team will be sporting Valken’s Redemption line of Professional Tournament gear for their matches in the NPPL and PALS along with the V-Tac Zulu scenario equipment for their numerous UWL, Woodsball and tactical events throughout the US and abroad.  Not only will Team Destiny be head to toe in Valken, they have also chosen to shoot the best paintballs the sport has to offer – Valken Redemption Pro! 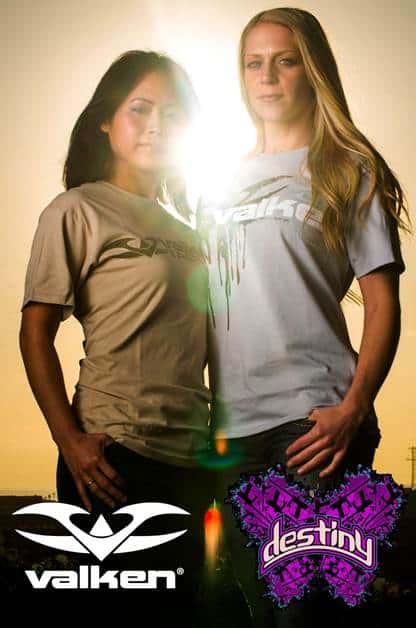 “We are excited to be working with Valken who has the best of both worlds for us, the woods and the turf. 2013 is going to be a huge year for Destiny and we are proud to be supported by the best with Valken”, says Kat Secor of Team Destiny.

Andy Potter, National Sales Manager for Valken states, “Destiny Army is going to make a huge push in to the scenario market this year and we invite all players to come out and join them at these events and also join us in the Valken Corps! We are honored to have Team Destiny as part of the Valken family for 2013”.

Team Destiny started out as an all-female paintball team rostering players from all over North America.  Their goal is to not only compete and win in a male dominated sport, but to encourage more female players to consider playing paintball in both the tournament scene and in the scenario world of paintball.  They also have a mission to help charities in need and have supported events such as Christian Lon Charity event and the Jeffery Young’s charity event for The Veterans of Foreign Wars.

For more info on Team Destiny please visit destinypaintball.com and go to their Destiny Paintball Facebook page for current updates.

Valken Sports is a sales, service, manufacturer and distribution company dedicated to serving specific sports communities that has coupled exceptional service with competitive, quality sporting goods. Valken Sports was created to break the stranglehold that mainstream companies had on their dealers and is the manufacturer and exclusive distributor of Redemption, Crusade, Fate and V-TAC lines of high-quality gear. To join the expanding family of fields that have already made the switch to Valken, email Debbie@valken.com

What do you think about the expanding family of Valken teams? Are you Team Destiny’s #1 fan? Let it be heard.