Skip to content
Sideline Coaching: Genie out of the Bottle? 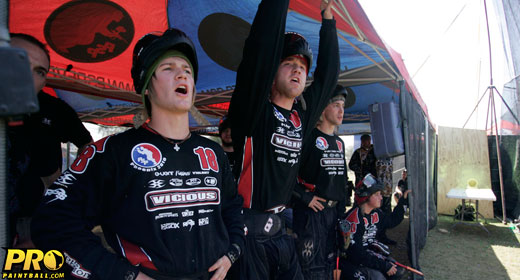 ‘HIGHWAY!’. . . ‘SHOOT the BOX’, ‘WEASEL ONE!’ ‘MAGIC the S2!’ ‘HE‘s in the. . .’  Sound familiar? If you’ve ever witnessed a ‘Race To’ match you know that the quotes above are often not so distinguishable. In the chaos that was formerly known as x-ball, the sidelines can be shear madness.

The concept of having sideline coaching (in its various evolutions) was not part of the original formula in tournament paintball. Today, there are those who play and coach the game who would like to see it . . .eliminated. Conversely, there are players and coaches who see no reason to stop using it.

The two are inextricably linked. In other words, you either can have yelling, screaming, communicating, or you don’t. If you try to say no sideline coaching, who is going to monitor crowd directives? The PSP at one point had a specific area for sideline coaching and there was a safety issue affecting it.

The alternative is no coaching, talking, etc during a game / match. However, one only has to go back a couple seasons ago to an ugly incident(s) that was caught on tape. The one way to eliminate the possibility of cheating is allow everyone to be vocal during live action.

So when speaking of sideline coaching, really it is part of and includes crowd participation. Then on what basis do some want to see side-line coaching done away with?

Putting a Lid on it

The main argument for removing sideline coaching deals with players relying on communication from teammates and playing the game more instinctively. Player makes a great move and gets the payoff. With sideline coaching the opposing player(s) adjust and the move may be neutralized. So in the rhetoric of those opposed to coaching, coached players are mere robots. In effect, joy-sticking players down the field.

It appears those who favor no coaching originate from two camps. The first would be players who have been around long enough to remember 10-man days and the move to seven-man. The second being players who have never played the game in a Race-To format. The former view old school paintball as a more pure form of the game. The latter not having had a chance to play in it tend to be less fervent.

A good example of this would be the WCPPL. Last year it shifted from a seven-man format to the Race to format. Many west coast divisional players got their first taste of sideline coaching. Many enjoyed it, while acknowledging it takes time to adjust their thought process. So does coaching from outside the net really influence the outcome of games?

How Effective is it?

It is hoped that the game is bringing in and developing enough competent players to be able to function either way. But here is a reality. Most Pro players, especially snake players want minimal information. Primarily, “where are the opposing players and who is shooting at me?”

An effective sideline coach can absolutely affect the outcome of a game. Working in tandem with a good snake player, they set up shots and moves using their own lingo. A few years ago, I remember a snake coach whose code for his Pro snake player to go get someone was to curse a particular phrase at him. It worked time and again.

Another point sideline coaching advocates allude to is a players skill set. The ability to decipher, pick out, listen to or ignore information (often in highly charged directives to the point of screaming) is a skill unto itself. Certainly at some point, every experienced snake player has gotten shot listening to bad info. It’s tricky. Not every team has a quality guy on the sidelines that knows the lanes and shots to direct traffic. Even then, the player has to be able to trust them. So while sideline coaching is far from a panacea for the player, there can be benefits.

Perhaps the greatest benefit is for those outside the field of play. Those in favor of coaching from the spectator side point to crowd involvement (as anyone is allowed to shout out whatever they please). Last week at the MAO, a Pro player had some friends attend the event. It was interesting to see their level of excitement and enthusiasm as they picked up the lingo amidst trying to understand how the game was played. There were smiles and looks of satisfaction. They felt like they had a small part in seeing and helping points won, yelling out positions for their friend. Being their first paintball tournament experience, both guys and girls talked about it all evening.

In other words, the coaching format is fan friendly. Spectators love to feel they have a part in the win or success of the team they pull for. It’s the same principle as fans screaming and yelling for their football team’s defense to get a stop on third down. Leaving the stadium hoarse and spent, they feel as though they had a part in it.

With five guns shooting twelve and a half paintballs travelling at three hundred feet a second, it’s hard to image any league flashing a placard that says “Quiet in the Gallery”. It’s not golf and it’s not tennis. Paintball is an intense, fast paced game. It lends itself to responding.

We see more athletic players now then at anytime in the game’s history. Just as slowing the game down to where players just sit in a bunker would be a step backwards; encouraging the ability for the crowd to interact is a move forward.

Whether sideline coaching should or shouldn’t be a part of the game, the Genie is already out of the Bottle. To take it away now would make for a lesser spectator experience.

We are in a time where we need all the energy and enthusiasm our sport can muster. Encouraging crowd involvement, coaching from the sidelines can raise the level of experience to one of spectator to one of participant.