The Friday Frag is going to deal with building a successful team and all the ups and downs that comes with it. I can tell you from experience that there will be times when you just want to throw your hands up and walk away from it all. In my blog I am going to cover all the aspects that are needed to build a successful team from the ground up. From picking your core players and designating jobs and titles, to dealing with the politics of paintball, to making the hard decision to “cut the fat” even if it is friends you have known for years. I will be blunt, but that should be expected from someone who was born and raised in the great State of New Jersey.

What is it you may ask? Well, it is going to be a little of everything from the perspective of a jaded scenario paintball player. In my playing career I have seen it all from all sides of the industry. I have written articles ranging from scenario tactics to sponsorship tips for magazines, been a Tech/Company Representative for one of the industries largest companies at 4000+ player events, helped test and develop gear that players are using today and so on.

For those that do not know who I am, my name is Josh Foote and I am the Captain of the Delta Paintball Team and the owner of Delta Paintball, Inc. A little background about my playing career is: I have generaled and been in the command staff for some of the largest scenario games in the United States, I have won numerous MVP awards, captained MVT and MoFo winners. In addition I have been the Captain of the Delta Paintball Team for the last 10 years, in that time frame we were seen as being at the forefront of scenario paintballs reemergence in 2006. The team has enjoyed actual sponsors from the paintball industries top companies and has traveled across the United States playing the sport we love. Along the way we have played with some great players and teams, but with that we have also played with some scumbags.

Starting with a solid foundation

All of the successful “pro” teams have been built on a solid foundation that is commonly referred to as being the “core group.” As with everything in life, people come and go as their interests dictate, however that core group is always there. I can not stress that like minded individuals is crucial to establishing the solid foundation needed for any team to achieve success. You as a team captain or team member should always take a step back and view your team from that of an outsider and see if you can see the core group of players that I am referring to. 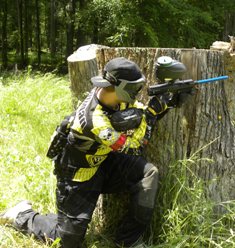 I have always stated that the shelf life of any team is usually 2-3 years. In that time frame, the team will either form an identity on and off the field, or the members will slowly gravitate towards those teams that share the same goals or identity that they are looking for. This can be something as simple as a player wishing to be on a “Milsim” team that solely runs missions at events or one looking for more of the party atmosphere where paintball comes second to the Friday night bash.

Every week I am going to leave you with a question to think about, there is no right or wrong answer with these; it is geared towards allowing you to take that step back and look at your team and possibly ask questions that you may never thought to ask yourself. Please feel free to contact me if you have any questions or requests for topics for me to touch on regarding building a “pro” scenario team.

This weeks question is: How many players do you think should be needed to form the “core group.”

Next week we will start the process by establishing the core group.