Earlier this month news broke that the game of paintball was under attack by the California legislature. The proposed law, SB 798, initially sought to change or limit the use and manufacture of Airsoft and BB guns but later on was increased in scope to include paintball guns. The paintball community immediately banded together in calling for the immediate rejection or amendment of the SB 798 bill and a letter writing campaign was launched. Early this morning we received a tip that progress was being made in the effort to save paintball in California. In addition, ProPaintball community members were reporting issues emailing letters to Senator De Leon and sources suggested his email servers were overwhelmed by the sheer volume of paintball related messages. Are we leaving our mark? Read on for the official release below. 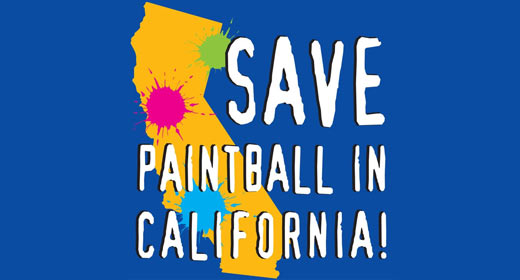 A press statement by the California Paintball Safety Coalition has been issued to clear the air;

The CalPBSC is happy to report that good progress on SB 798 is being made by the industry lobbyist group with the appropriate California legislators. The public safety committee hearing that was scheduled for June 14th has been delayed to either June 21st or June 28th so even more progress on the legislative discussions taking place is expected before the hearing. In the interim, please keep writing the “template” letters to Senator De Leon or your local assembly representative. The template letters were emailed out last week or can be accessed on www.facebook.com/savepaintballincalifornia.

It has been noted that some organizations and individuals have taken it upon themselves to propose alternative bills or compromises to the original bill on behalf of the paintball industry. It is extremely important that the paintball industry presents a united front to the legislators in California. We welcome ideas and input, but we would ask that all ideas or suggestions be sent to the CalPBSC at CalPBSafetyCoalition@gmail.com for consideration. Please support the CalPBSC in this regard as we are indeed making good strides and don’t need individuals that mean well inadvertently dividing the industry.

The rescheduling of the meeting is a good sign that our letter writing and calls to our senators are having positive effects on the process. With that in mind, we strongly encourage you to continue to email and call your Senators in an effort to show your continued interest in having this bill rejected from the legal process.