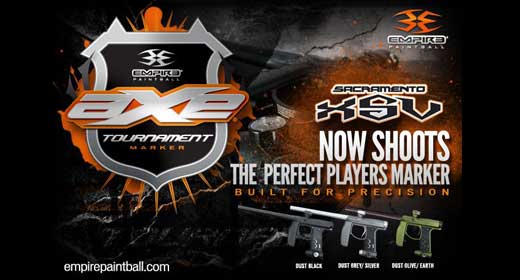 A few weeks back we received two cellphone photos of Sacramento XSV field testing the new Empire AXE paintball gun. The photos were captured by a local player/ ProPaintball community member, and featured pro player Eddie Tamao loading and playing with the marker. ProPaintball sent a few questions to XSV inquiring about the photographs and a potential gun change for the 2011 season but no response was provided. Fast forward to today– a report surfaced on BallersCafe that Empire Paintball has officially signed pro paintball team Sacramento XSV to shoot the Empire AXE for the 2011 paintball season.

“The team has been very impressed with the performance of the gun,” said Rich Telford of Sacramento XSV. “I remember a time when a great, pro-level marker needed to be out of this world expensive! Times have changed and in the twenty-first century, a paintball gun can be both affordable and ready for competition – and Empire Axe is it.”

“The AXE is light, fast, accurate and compact…all the things I need in a paintball gun! For anyone who plays as aggressive and up the field as I do, the new Empire Axe is the perfect choice! I can’t wait to hit the snake with my Axe in 2011!”

Read the full story at BallersCafe here: Sacramento XSV to shoot Empire AXE Marker in 2011. Interested in the AXE? Check out the Empire Paintball website for more information.