Earlier during the week, Russian Legion was featured on the Pro Paintball MAO Watch List as a strong contender for the MAO event. Going into the event, the Russians were 5th overall in the PSP and 5th in the Pro Paintball power rankings. In the final match against Edmonton Impact, Russian Legion dominated the pro field and secured their place at the top with a final score against Impact of 7 to 2. New comers to the pro division, San Diego Aftermath, made their pro debut at the recent Chicago Open, blasted out the Ironmen for a 3rd place finish. Here are a few words from the PSP and final scores from each division. 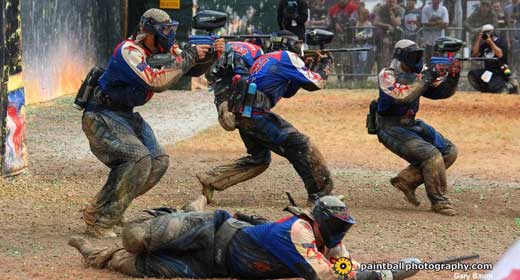 Congratulations to Russian Legion for winning the Professional Division of the 2010 PSP Mid-Atlantic Open!  The mostly-Russian team faced off against Edmonton Impact out of Canada (2010 PSP Phoenix Pro Champions) to fight for the title.

Teams from all over the United States and abroad competed in three days of non-stop paintball action across five fields at the Paintball Central Sports Park of Rock Hill, SC for this weekend’s PSP Mid-Atlantic Open.  This is the highest level of competition in the world, so the following teams who came out on top deserve much respect and recognition:

Congratulations and thank you to all of the teams, sponsors, fans, referees, crew and staff who all made this year’s PSP Mid-Atlantic Open such a successful event.  We look forward to seeing everyone at the world’s largest paintball tournament, the PSP World Cup, being held at Fantasy of Flight in Lakeland, Florida October 21 – 24, 2010.