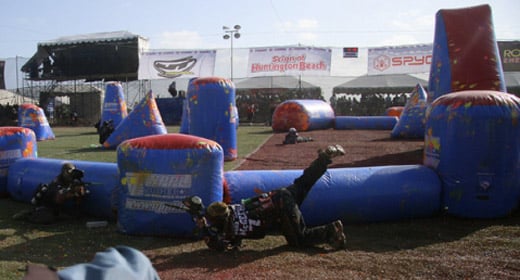 ProPaintball insiders are reporting a last-minute rule change was emailed to all professional team-owners this week. The NPPL rules commission stated that a mandatory electronic monitoring device must be installed on all professional division markers before play.

According to our insider sources, all professional NPPL players will be required to turn their paintball guns in to the designated techs in the pro staging area between 2 and 7 on Thursday afternoon. A new “chip” will be attached to gun to monitor players for any rate of fire that is out of the ordinary. At first glance, this seems to rectify the rate-of-fire cheating issues that have plagued the Super-7 pro division in prior years–but upon further investigation, might cause more problems than it fixes.

Our sources indicate that this add-on transmitter is manufactured by a major player in the aftermarket paintball circuit board industry, and works by installing in-line with the marker circuit board and solenoid. Utilizing the power pulse sent from the circuit board to the solenoid, it emits a transmission that is then captured by a central monitoring system–with the intent of stopping players from breaking the 15bps cap.

After further review, ProPaintball insiders suggest there is a possibility for multiple issues with the anti-cheat implementation. Specifically, certain markers have very tight volume constraints in their grip frames–notably the Luxe, Empire AXE, and G6R–leaving almost no space for additional wiring harnesses or transmitters.

A second issue is gun performance–a third party transmitter will be piggy-backed onto the existing marker wiring that relies on the gun’s power source to transmit–with some marker’s wiring harnesses that don’t allow for the easy-addition of these transmitters (requiring soldering and the expertise of a trained technician to install it). If the wiring harness or solder joint fails, is it the sole responsibility of the installation or chip manufacturer? When the connection between the board and the solenoid fails, the marker is un-fixable on the field–and thus, you’re playing a man down. Who is liable for these losses?

A third issue is power consumption. As noted with loader RF transmission, there is limited range to these transmitters– 10 feet at most. While there are stronger transmitters available, it is a huge power draw on the board and battery, and it generates additional heat that can melt internal components. These transmitters must overcome the Faraday-cage like effect that marker frames and metal-lined grips have on radio emitters. The additional power that is needed can also produce a brown-out effect on the gun–not allowing the solenoid to function at full power, which will reduce the force in which the valve is impacted–resulting in VERY dramatic changes in velocity, especially in high voltage draw scenarios (rapid-fire).

Lastly, while our insiders have an idea who has been contracted to manufacture these chips, it isn’t confirmed. This raises the perennial question of “Quis custodiet ipsos custodes?” (Latin for ‘Who will guard the guards themselves?’). When rule enforcement is farmed out to an external (and in this case, a paintball company with vested interest) agency, who monitors the installation and rule-enforcement of these devices? Who can guarantee that this company will not allow sponsored players the opportunity to bypass the rules? Furthermore, it doesn’t bode well that some aftermarket circuit board manufacturers have a proven track record of selling illegal / cheater software to the general masses for an exorbitant sum.

While these changes are being beta-tested at the pro-levels, rest assured that we will see this “chip” mandated for use later in the season–which will mean an additional purchase of equipment that is required to play.

Here is a snippit of the NPPL  announcement sent out to the pro teams;

I’m sure players will want to know if their gun’s performance will be affected. The RF chip does not consume any battery power while the gun is “idle”, so it does not reduce battery life by any noticeable amount. The chip does not interact with the circuit board of your gun in anyway, other than to run a plug-in-play splitter off the solenoid wire which allows us to transmit an RF signal every time the gun is fired. This lets us monitor and record statistics for every player on the field.