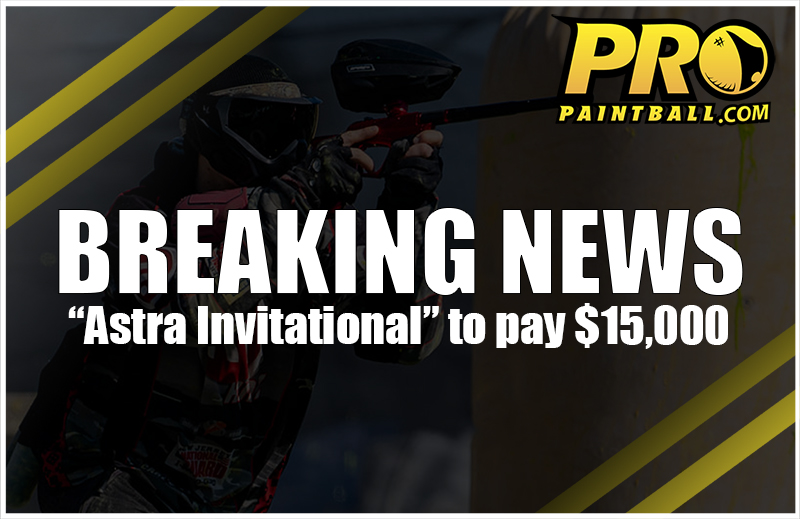 Our ProPaintball insiders are reporting that a group of veteran pro paintball players known as the “Astra Group” are working on a private paintball invitational with a $15,000 prize on August 14th and 15th called the Astra Invitational.

The format is quite an interesting break from what we have been used to over the last decade. It is reported from insiders that the event will use a 4-pod per player format. This was done by the promotors “to change the format up and bit and keep costs down.” This is quite a change from the normal unlimited paint format that has dominated US tournaments for the last few decades. It should help to promote aggressive play and reward high IQ players the most.

In terms of the structure of games, the event will consist of five matches in a preliminary round, and then finals on day two to crown the champion of the large cash purse.

Our source told us the roster rules as well; “Teams are allowed to use their current 2021 rosters of up to 8 professional players, and can also add up to 4 semi-pro divisional players. No stacking the deck with athletes from non-playing (pro) teams.” We are also hearing that a few select semi-pro teams may be invited.

The rumor is that paint will be BYOP (bring your own paint) but insiders are reporting on a rumor that a major paint manufacturer will be selling paint on location as well.

The source close to the group had the following to say regarding the purpose of the event “They want people who compete at the highest level to rub shoulders with each other and see how semi-pros stack up; see why pro’s are pro’s and why semi pros are semi-pro”

Rather than taking the traditional route for media, matches will be recorded and then released over TikTok, Youtube, Facebook, and other major platforms by a professional videographer group, sources say.  This route was chosen because they want as many people outside the sport to see this event as possible. There will be no cost for this media and it is reported that it will be openly available after the event.

The “Astra Group” is confirming that the event will be reffed by professional players and veteran referees in order to provide elite levels of field judging.

This story is developing and our team will continue to report as we learn more. This is a rumor from our insiders and sourced from those close to the group.