With the weather looking greater then most tournaments in the past season, the PSP Phoenix event came to a conclusion. Teams packed up their cars and headed home from a long weekend at Glendale Stadium. Read on for the final event scores, a few thoughts from the event and a handful of photos from Matt Dawson. 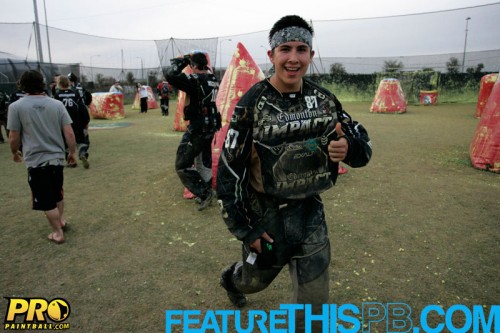 Final thoughts: The event ran very smoothly. While the PSP was not running their webcast, Camille Lemanski was busy updating the facebook/twitter page with point by point updates and she did a wonderful job keeping paintball fans updated.

There was several new paintball products at the event including the new Alien/Understood “Chalk” Marker and the Planet Eclipse Geo2. Pro paintball players from VICIOUS, Dynasty, and Impact that shot the GEO2 noted that while it was a prototype, the geo2 paintball gun performed flawlessly throughout the weekend and that they were very happy. Check out this photo of Dusty Odell and the GEO2 in action.

Edmonton Impact and Tampa Bay Damage played some amazing paintball over the weekend. Ryan Moorehead from Edmonton Impact was killing it on the dorrito side for Impact. Ryan is without question one of the top players in pro paintball and has definitely proved himself to be an asset to Impact. This event was the first time Impact has won a PSP event in the professional division. Congratulations guys, great job!

In the semi pro paintball division, Newport Beach Entourage defeated RNT Allstars for the win. This was Entourage first semi pro paintball event as a team and they have definitely proved themselves. There was alot of speculation that some of the pro paintball players on Entourage would not be able to play the event because of player classifications. Entourage player Ryan “Meezy” Martin joined up with the RNT Allstars for the Phoenix Open. RNT was short on players (they only had 5 of their own) and Ryan was the 6th. Both teams played exceptionally well throughout the entire event and ultimately had to play one another in the final game. In the final match up against Entourage for 1st and 2nd place, Ryan Martin sat himself so that he did not compete against his own team. RNT Allstars played with 5 guys and were unable to rotate any players between points, ouch. We can’t blame Ryan for what he did, but we can only imagine that the lack of rotation and freshly energized players for RNT gave Entourage a competitive advantage. Maybe next time RNT will bring more players to the event.

The scoreboard on the pro field was extremely difficult to follow. Rumors had circulated on Saturday that PSP officials were working to swap it out with another but word is they ran out of time. We have a hunch that the scoreboard will be replaced before Chicago.

Last but not least, congratulations to everyone involved and thanks for everyones help and support throughout the event!