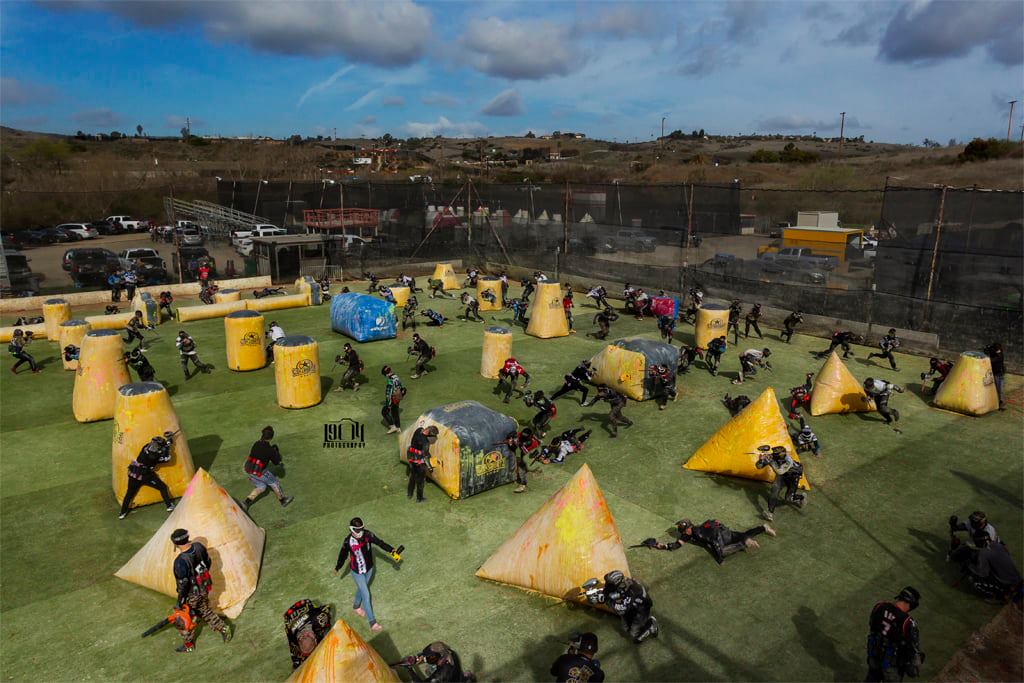 Over the weekend several NXL pro paintball teams flew in to San Antonio for a Mega Practice. From everything we heard, this was run like a mini-event and there was some amazing paintball action. The following Pro Paintball Practice Report was provided by Mike Hinman of San Diego Aftermath. This is a firsthand account of how the various teams fared against one another. Enjoy -JM

“As many of you know….. on March 20-21 6 pro teams met at X-factor paintball park in San Antonio Texas for was being deemed the “mega practice”. Here is my personal breakdown of the practice and teams involved.  Location – For those of you that have never been to X-factors field in San Antonio Texas, your missing out. The staff at X-factor always does a top notch job at preparing for the teams. They make the difference in the practice being…… just ok or amazing. Thank you Jeff for the hard work.  Weather  – We couldn’t ask for any better weather this weekend. Sunny and a few degrees under 70. We couldn’t of asked for much more.  Teams – I will try to give an as in-depth look at each team as I can without getting to deep into the specifics of each team as not to divulge trade secrets. If that all makes sense.

San Antonio X-Factor – X looked solid. What else can I say?! We went 1-1 with them over the two days. Day one they annihilated us. We never had control of the match. They took us to the deep water and flat out drown us. Day two for us was better with them. But again this was practice and this match could’ve gone either way a few times. We pulled it out at 4-3. But this might’ve been Coach Ryan Brand trying things. We learned a ton from X threw at us. And we appreciate it.  While this team is LOADED, I would like to give a special mention to Meter and Cody Bayless. Not that they outplayed anyone but both of them have stepped up a ton in the absence of Colt Robert’s. Rumors have Colt coming back at some point this season.

Houston Heat – Heat also looked like the World Championship team that we all know. Todd Martinez (my boy!!!!!) was at the helm. It was apparent that Todd wasn’t interested in the practice trophy. He was mixing his talent up and putting guys in spots that they might not normally play. Heat was playing to win and that’s not a surprise. But this was classic Todd and his molding a team to do what he wants and have a system. Much like he did with the LA Ironmen. Heat gave us the roughest beating of the weekend. 6-0. This classifies as a “soul snatching” in my book. This is one of those moments that a short term memory as a coach is in order. Humbling.  And this team too is loaded…… but my shout out would go to Ronnie and YAYA. They showed up with little rust from the winter. Heat was short Federov and Sam. Sam was in attendance but was held out of practice in an abundance of caution due to a knee injury. We all expect to see him weekend one for practice.

Infamous – It was great to get to catch up with many of my old friends on this team. Cody and Travis have done a solid job assembling the talent they have. We lost on day one in OT to them. These always sting. It was so close. But we learned a great deal from it. Day 2 we got the best of them at 6-2. We went home and really worked on our game plan for this one. It paid off evidently.

In a bit of unfortunate news Nate Schroeder dislocated his shoulder on day one and was done for the weekend. It seemed to be a freak accident. As it was already out of socket long before he got to his destination bunker. He has a history of this injury but has had surgeries to fix it. We hope he heals up and is ready for the start of the pro season. Jonah Jamroz was the stand out of the new players to me. We have all seen Jonah play for many seasons and make small progressions in his game. The young kid we once knew is gone now…… and what remains is a young man that has put some serious work into his craft. I would expect to see some growing pains along the way but in my humble opinion Jonah has the ability to be a Grade A talent in my book.

ac: Diesel – Who doesn’t like these guys?! If you said “me”, you probably have some underlying issues that you need to work out at therapy. Mark has assembled quiet a cast with Diesel. And they didn’t disappoint. We played them both days. Day 1 was a loss for SDA. They scored a point with under 10 seconds left to hand us another loss on a rough Saturday. Day two we got the better of them. This was also the second time we have seen them this year. So we had a good idea what to expect going into it. And I predicted that it would be a close match. And both of them were. On top of playing and working on their team cohesion, Diesel also helped their sister or brother team Ac Dallas (no pun intended).

Diesel was short “Ice man” Mark Baginski. And as most know Ice is a future A grade talent. But not to fear…… Mark and the boys played great. BJ has cemented himself as the First attacker in the snake for them. Many teams tried to pick on him I feel this weekend. Knowing that if the extra gun on him (double team) could get the early kill, it would open up the snake. Zach Hill also had another solid weekend with the new squad.

ac: Dallas – Well……. where do we start with these guys?! First off whatever you think you know about them, throw that out the window. I came into the weekend a bit intrigued at this new team. Who are they?! While we know many of them came outta D2 and the rest came via tryouts this off-season, who is this team? What are they made of? Did someone with deep pockets buy the spot? Is this another wealthy kids family buying a spot? Well while I can’t really attest to how this team got the opportunity, they surely have made the most of it. I had imagined that they would’ve been quickly handled buy the big boys…. they weren’t. They held their own with very team they played. Even going to OT in one against X I believe. We played them once and won by one or two. But again this wasn’t a “cake walk”.

I would name standout players this weekend but to be honest……. I have no other previous game play to go off of. What I can attest to is that this team was the most level headed all weekend. No “chirping” or trash talk. While some of the normal practice crybabies in the pro division were giving these guys a hard time, Dallas never played into it. They stuck to their principals and listened to their coach.  They deserve the chance. Respect to these kids.

San Diego Aftermath – 0-4 on Saturday and 4-0 on Sunday. It was that kinda weekend! After a rough day on Saturday, we stayed hours after the others had left. We practiced till 7pm. Drills, drills,drills. We came in to practice with 10 guys. Saturday was a reality check for some of the young guys and a few of the older ones. But with the turnaround on Sunday…… I guess the reality check was for the better. The team still has a ways to go before event 1.

While many of our players are well known from other pro teams. Two guys that really stepped up this weekend were “Pastor” Troy Ericson and Archie Barnes Jr. Troy has been around for a while and is well known on the west coast for his aggressive nature. This weekend was no exception. Troy has the ability to be a grade A talent. Next up is Archie Barnes Jr, he is a NorCal player and came to a tryout in the off season. Archie moved up the depth chart with solid snake play and his ability not to make the same mistake twice.   To wrap it all up……. it was “exactly what the team needed”. It was competitive, fair and last but not least fun. Three weeks till we kick off the practices for event 1. See everyone soon!  -Mike