The USPL West Coast Open is quickly approaching and the pro teams are making final preperations for the big paintball event. Read on as we break down the practices, the injuries, and feature a video of Scottsdale Elevation.

Dynasty Entourage vs. Phoenix United: The teams battled it out in 100 degree weather at Action Star Games in Southern California over the weekend. Reports indicated that the field played out very well, and seemed balanced on both the snake and carwash sides of the field. Phoenix United had a few players guesting with the team and there performance wasn’t up to par; Entourage was the clear leader throughout the weekend. The teams had a successful practice and spent most of the weekend trying new plays and breaking the field down. 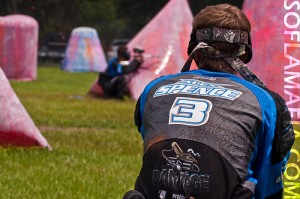 Tampa Bay Damage spent the weekend training with Guatamala-based paintball team, The Rangers. The rangers were in town for the Central Florida Paintball Series tournament on Sunday and Damage helped them walk the fields and practice for the event. TB Damage will be holding a private practice this weekend at their home field in preparation for the USPL 7-man event.

Scottsdale Elevation: Arizona was heating up and the team got an early start to beat the heat. Nick Slowiak of Chicago Aftershock came out and played against Scottsdale Elevation with his AZPPL team, Retribution. This weekends practice was a hot one with weather reaching above 110+ degrees. The team spent the weekend trying to get ready for the West Coast Open, and is working to put together a trip out to California before the tournament to get in a solid grind against some of the stronger teams in the league. Check out the paintball video clip from practice below;

SF Explicit, Bushwackers, BLAST and SAC XSV: Capital Edge Paintball Park was host to an amazing weekend of paintball. Between the WCPPL event and 4 pro paintball teams there was alot of paintball action taking place. On Saturday, SF Explicit, Blast and XSV battled it out playing approximately 12 or so matches each.  On Sunday, the OC Bushwackers joined in on the fun and the teams played balls to the wall paintball. Word has it that SF Explicit played hard but suffered a few injuries; Adam Florendo suffered bruised ribs and Ryan Pruitt hyper extended his knee.