We just received the following press release in our inbox. According to the information below, the CFOA just inked a major sponsorship deal for the 2011 paintball season. Congratulations! 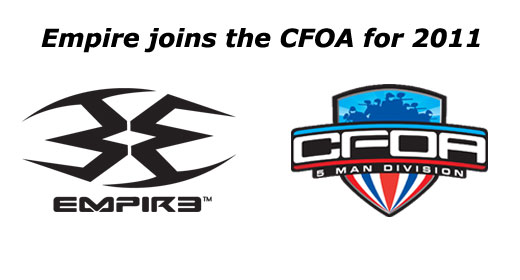 Empire Paintball, one of the most well-respected manufacturers in the paintball industry, offering several of the most widely known and highest quality products available, have reached an agreement with the CFOA to once again support the league as a League Presenting Sponsor for the 2011 season. “For the 6th year in a row, Empire Paintball is pleased to support the CFOA,” said VP of US Sales, Johnny Postorivo. “The CFOA has always put on an outstanding event series, with top notch locations and event support for the Southeast.” This arrangement will enable players and teams to shoot Empire’s brands of paint at  all the CFOA events in 2011 as well as purchase a selection of Empire’s tournament grade paint’s such as All-Star, Evil and the prestigious Ultra Evil at the events.

“Thanks to the support of Empire, the CFOA will continue offering great events and will continue to make bold steps to reduce the cost of competing for players at all levels in our region. We are really focused on bringing the fun back to tournament paintball in 2011, and none of this would be possible without their generosity and faith in what we do,” explained Event Coordinator, Ken Barrett.

About Empire Paintball:
Empire Paintball offers a variety of paintball products from warehouses across the United States and Europe and supports several of the most successful professional tournament teams in the world. Infamous, Dynasty, XSV and Vicious each found extensive success shooting Empire brand paintballs. The world’s top professional teams also wore E-Vents goggles on their way to the top of the podium. Empire continues to offer some of the best and most stylish clothing and performance wear available today.

About the Carolina Field Owners Assocation:
The CFOA will promote nine events in various formats and divisions in 2011 at venues across the Carolinas. For more information or to register for an event, visit the official league website online at www.thecfoa.com.