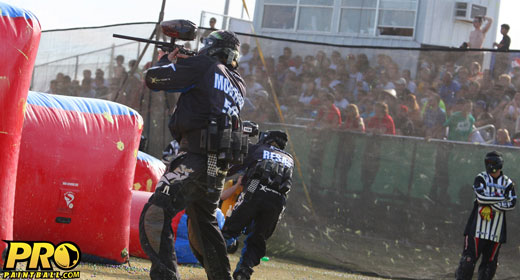 What happens when you combine 20 pro paintball teams, two competing formats, current pro standings and mashed potatoes? Lots of healthy discussion. The mysterious Baca Loco from View From the Deadbox spent time analyzing our PRO Power Rankings and the communities response and poised several questions. Read on as VFTD and PRO Paintball discuss the Power Rankings.

VFTD: . . . the issue of two different leagues plays out when only some of the ranked teams compete in both the NPPL & the PSP. Clearly, it’s a factor as the top 4 teams all compete in both but it does create some potential controversies as well.

PPB: It is to be anticipated that teams ‘doing well’ in both leagues would be at the top of the Power Rankings. However, playing both leagues is no guarantee of being ranked near the top (see XSV ranking).

As you are well aware, the current state of Pro Paintball involves two competing PRO leagues utilizing different formats. The formula, as we have mentioned, is continually evaluated and fine tuned. Within those parameters, there is no partiality or favoritism.

VFTD: How does one reasonably compare Vicious with Mutiny, for example?

PPB: While these two teams as well as others do not play each other, they do have common opponents. While the value is a small one, it does account for this situation. Power rankings within the major sports have team rankings that also do NOT face each other in head to head competition.

Given that there are two pro leagues and two sets of pro rankings, our Power Ranking combines the official ranking data as well as several other data points to provide a gauge of how well these  pro paintball teams stack up against one another.

VFTD: Are the rankings shaded in favor of one league or the other?

PPB: One of the main tenets concerning Pro Paintball’s Power Rankings is to let the numbers speak for themselves. The formula, while not perfect, is continuing to be tweaked. Currently it contains 11 components. In answer to your question, no team receives any favoritism, sponsorship, friend, or good ole boy points.

There is one agenda however. Namely, to make paintball more fan friendly. The Power Rankings are designed to provide both paintball fans and players something to discuss between tournaments. Our ultimate goal is to encourage dialog about the game.

In response to your question regarding the one league weighted in value over the other, we would ask: Do YOU view the two leagues as equal in their competitive value top to bottom? Should incorporating D1 teams into the Pro prelim schedule affect that competitive value?

VFTD: Can any team that doesn’t compete in both leagues realistically end up on top of the rankings?

PPB: Let’s use the Russian Legion for an example. Had the Russians won all three PSP events with the equivalent statistics they accumulated at the Mid-Atlantic Open, they would be right there for the lead. With the bonus series points that will be handed out for winning each league, it’s not out of the realm of possibility but they would need help.

Playing both leagues and doing well is not easy. There are resources, energies, and focus being diverted from giving a team’s all to winning one league. So some people may not like it, but really, it gauges better than you might think. Remember, the PRO’s are currently competing on two different formats. Could the (using our example) Russians step over into the NPPL and win? Maybe, maybe not. The Power Rankings can only factor in real numbers and not speculation.

VFTD: Would a team that competes in both leagues but performs poorly in one be penalized when compared to a team that only played one or the other?

PPB: No, there is no component to the formula that takes points away. San Diego Dynasty is right in the mix for the NPPL Series, they currently sit 4th in the Power Rankings. There are points awarded for playing both leagues based on the statistics. The only ‘penalty’ would be their lack of playing well and not accumulating the most points they can.