The 2012 PSP Phoenix Open has concluded and the champions have been crowned. After several days of heated battles, pro paintball team Houston Heat and division 1 team Texas Storm earned their first wins of the season and put the great state of Texas back on the map. Read on for final results. 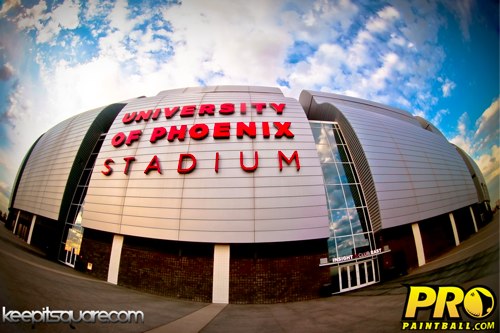 PSP players and teams converged on the University of Phoenix Stadium in Glendale AZ for the PSP’s second event of the season. The weather was warm and dry and the playing fields were covered by level and well kept grass. While the layout was a duplicate of the field from the 2012 PSP Galveston Open, players and fans were able to participate without threat of hurricane style storms.

On Thursday, Paintball Access (the media arm of the PSP) began treating paintball fans across the world to a free paintball webcast. Hosted by pro veterans Matty Marshall, Chris Lasoya, Todd Martinez, Davey Williamson and Steve Rabackoff, and filmed by Patrick Sophrer (Monkey with a Gun fame), the webcast was presented in a clean, professional format that was easy to follow and very entertaining.

Thursday saw the culmination of the matches carried over from PSP Galveston (pro division was delayed due to weather). In that event, Tampa Bay Damage defeated new comers Houston Heat for the 1st place title.

Friday began the preliminary matches for the PSP Phoenix Open. Most of the matches were fairly straight forward with the occasional penalties but nothing out of the ordinary. The surprises didn’t start until late Saturday when we learned that Tampa Bay Damage, who won the PSP Galveston event (played only two days prior and on the same layout) and San Diego Dynasty had missed the cut. To the shock of the entire paintball community, neither Dynasty or Damage would be moving on into the Sunday club and playing in the finals.

Pro teams playing in the quarter finals included San Antonio X-Factor, Los Angeles Ironmen (who had gone 4-0 in prelims and earned a bye), Omaha Vicious, LA Infamous, Russian Legion, and Houston Heat. Infamous played Russian Legion and the Russians proved they wanted it more. Following on their heals, X-Factor beat out Vicious. In the semi’s, Ironmen and Russians played one another. The match was close and it looked like the Ironmen were going to tie it up and push the match into overtime but a major penalty (red flag) against the Ironmen ended the game early. This win by the Russians would allow them to move on into the final match up. Following the RL vs Ironmen match, Texas pro teams Houston Heat and San Antonio X-Factor faced off against one another for the right to represent Texas. Houston Heat proved the better of the two and would move on to do battle against the Russians.

In the finals we watched as rivals Russian Legion and Houston Heat faced off for 1st and 2nd. It is worth noting that while composed of three former Legion players and several pro veterans, Heat is a relatively new team. 2012 marks Heat’s inaugural season. While the Russians put the first point on the scoreboard, Heat left an impression by scoring 3 in a row. The match went back and forth but ultimately Heat won out and secured their first victory with a final score of 6-3 against the Russians.