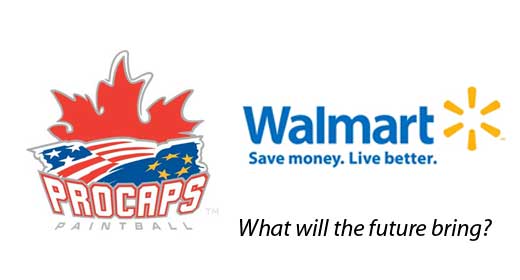 Last week the paintball community was shocked when rumors surfaced that PROCAPS lost their Walmart account. Procaps had been supplying the goggles and paintballs to Walmart which were then sold in the sporting goods section. Sources indicate that Walmart may have had issues keeping the shelves stocked and began looking for alternate suppliers and possibly a better price point. A few years ago, JT USA was supplying Walmart with their paintball products. Walmart accounted for a sizable portion of JT USA’s business and when Walmart dropped JT for Procaps, JT as a company was unable to recover and was ultimately purchased by KEE Action Sports. Its worth noting that one of the strategies KEE had when they purchased JT USA was to add JT USA’s then president John Robinson as president of KEE and K2 President J. Wayne Merck to KEE’s executive team, both of whom have an extensive background in mass merchandising and ultimately go after the mass market.

Sources suggest that Walmart accounted for approximately 40% of Procaps business. With that in mind, Robbo from PGi has shared a few thoughts on what may be in store for PROCAPS, Draxxus and V-force. Original posting is available here.

It seems Procaps has lost its long standing contract to supply Wal-Mart with paint …. Kee Action Sports now assumes control of that contract and look to consolidate their ever-increasing position in the marketplace. Procaps has had a rough time of late as it struggled to shuffle off the coils of recession that have been strangling this company over the last few years.

They have had a torrid time of it for sure as they seemed to have tried every corporate trick in the book to turn the tide and transform the bottom line business into something that looks altogether healthier but I’m afraid the writing on Procaps’ wall looks ominous, to say the least.

Also in Montreal, we now have Procaps’ arch nemesis, Richmond Italia [original owner of Procaps] gearing up a dozen machines to churn out container after container-load of paint into the marketplace and so the paint-selling landscape looks decidedly inhospitable for any company seeking to gain an increased market share or a larger margin … in fact, it couldn’t be a worse time to lose one of your major supply contracts, it really couldn’t.

I have always believed Richmond would always return as a White Knight to save the company but the powers inside Procaps towers have always strenuously resisted such an embarrassing homecoming.
Mind you, Richmond had never entirely let go of his interests in Procaps and hung on to a fair sized chunk of the company in terms of shares owned and so this situation must create ambivalent feelings in him as he now watches from the sidelines.

Mind you, a straight buy back by Richmond has always been resisted because of a problem with the price as against the principle because in my experience, big investment corporations have little to no principles; their raison d’être is the 3 ‘M’s ….. money, money, money.

If Richmond had offered what they thought to be the right amount [and then some] I think they would have sold long ago but maybe it was the ‘and then some’ that divided them which would be tragically ironic if true. Still, this all beggars the question as to whether or not this will prove to be the straw that broke the Procaps’ back?

I would have said prior to them losing this contract, they wouldn’t have been healthy enough to cope with such a loss and nothing has really changed this view, and so, I believe we will now begin to witness the final and tragic death throes of Procaps.

I’m afraid the hierarchy within Procaps will wake up one day and as they go to get out bed, the carpet will be whipped from under them faster than a shot on a pro player’s jersey.
The decision for continuance [or not] is made way up the corporate ladder, way out of sight of the Procaps people …

Procaps is owned by a huge investment company and so these people make decisions based solely upon the present state of company and the predicted state of the marketplace; it doesn’t take much to work out what the nature of those predictions will be.

Consequent conclusions and decisions are equally predictable if things stay the same.

We could of course see someone swoop in to take over the reins of Procaps but any room for financial manoeuvre has been drastically reduced leaving them prone to a buy-out well below what they would have expected.

This type of situation normally lends itself to one of the other big boys dropping in with all the subtlety of an anvil, people like Kee will no doubt be watching this all unfold like a hawk .. waiting for the right moment. It certainly makes financial sense for someone like Kee or indeed Richmond to buy them out but commonsense at this stage of the game is like rocking horse doo doos and we will have a few interesting months to see where the sh!t lands after it hit the fan on hearing Wal-Mart’s business went on the missing list.