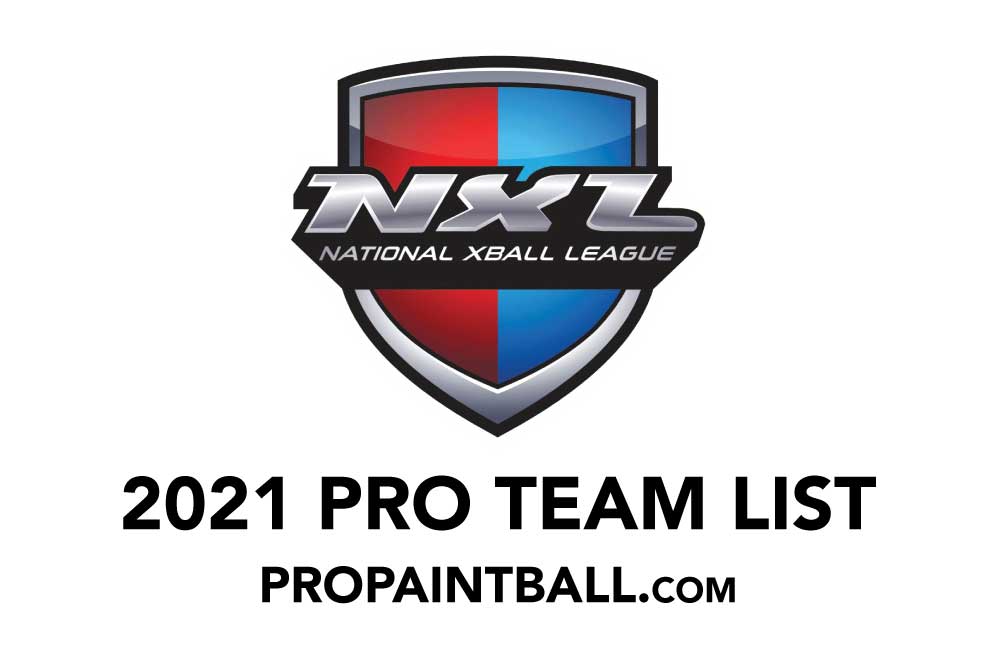 The 2021 pro paintball season is shaping up to be one of the more exciting seasons in years. There is sure to be fierce competition as the 20 professional teams compete for the series championship.

The LA Ironmen are the DYE Precision factory team. They are owned by former pro player Dave Youngblood and practice regularly at Camp Pendleton in San Diego, CA. The team has as mix of local San Diego based players and a few that fly in to practice.

The LA Ironmen shocked the paintball world with a win against the Russian Legion at the NXL 2020 season opener in Las Vegas, Nevada. The LA Ironmen had not won a pro paintball series event in over 10 years. The final score was Ironmen (7) to Legion (5).

At the 2020 Paintball World Cup the Ironmen made paintball history by hiring Nikki Mcevers, the first female pro paintball coach.

The Russian Legion is a formidable program based out of Russia. They have a private paintball field in Moscow and shoot DYE Precision paintball guns. The team is very quiet about what moves they are making and in many cases we don’t find out until right before the event. The Russians have been a top contender in ever NXL paintball event they have participated in.

Impact is owned by Bart Yachimec. The team has seen a variety of roster changes since inception but in the last 5 years we have seem them dominate the pro circuit. The 2021 roster is a blend of Canadian and US based pro players.

Revo is reestablishing itself with players from the Upton 187 Crew. They kept the city name Baltimore to avoid the $5,000 fee from the NXL series to change their pro paintball team name.

You can’t talk about Dynasty without mentioning they are Triple Crown Champions. The team was started by a group of Amateur players and lead by industry pro players Sonny Lopez and Chuck Hendsch. Over time the roster has changed but Alex Fraige, Ryan Greenspan, Yosh Rau and manager Eric Crandall have stayed true to the dragon. The team has its ups and downs over the years but they have a solid roster the potential for a big year in 2021.

Damage is based at Central Florida Paintball.

AC:Dallas is owned by former pro Greg Pauley. Prior to AC:Dallas & Diesel, Pauley had been a coach of San Diego Aftermath and Omaha Vicious and had helped lead both teams to several top finishes in the NXL Circuit. Sister team to AC: Diesel and based at PBFit in Dallas, TX.

Often known as BKiT, or Best Kids in Texas, X-Factor is based at X-Factor paintball park in San Antonio Texas.

Heat is composed of players from Pittsburgh, Chicago and Russia.

NYX was part of the original NXL in the early 2000’s. The team relaunched in 2018 and in 2019 we saw the team find its way back to a competitive footing with wins against established teams AC Dallas and the Russian Legion.

AC:Diesel is an Empire Paintball team, and sister team to AC:Dallas. Headed up by Greg Pauley, the team practices at Paintball Fit in Dallas, TX.

Originally known as Miami Effect. Travis Lemanski is the player/owner. Players are from Maine, Wisconsin and several other states. They are known as Infamous because they broke an NXL rule at the time (early 2000’s) against competing in a rival pro league. Infamous competes in both the NXL Xball and NXL Classic (10-man) formats.

LVL (pronounced LEVEL) is based out of LVLUP Sports in Columbus Ohio. Coached by Robbie Goldsmith from now disbanded pro team Chattanooga CEP and Adam Michl. LVL had 2 second place finishes and a 5th place finish in the 2019 Semi-Pro NXL circuit which helped them secure a pro slot in 2021.

NRG Elite has players based in Wisconsin, Virgina and a few other states. The teams home field is Chesapeake Sports Park / CSP Paintball.

Originally a European team, the Kings have opened up a US Franchise team that is made of mostly Florida based players. The ML Kings (US team) is based out of Central Florida Paintball Park.

Aftermath originated in San Diego in 2005. Started and owned by former pro player Mike Hinman (Dynasty, Aftershock, Bushwackers). Hinman took back the reigns in 2020 and has rebuilt the team with a combination of players from Sacramento DMG, LA Ironmen and other local San Diego divisional teams. During the 2020 Winter the team practiced every single weekend so that they were ready to prove themselves at the 2021 season opener. In the first event they made it into the Quarter finals.

Uprising is primarily Portland based and calls Impact Action Sports in Oregon their home field.

Also known as TradeMyGun Outlaws, the team is based out of Fort Wayne and calls Paintball Plex their home field.

2015 saw the re-launch of the National X-Ball League. The first 10 pro paintball franchise teams that signed up to compete in the National X-ball League are listed below, along with statements from each team owner. This is a key milestone as this provides a starting point for the teams to vote on the many decisions that will impact the 2015 season and future NXL season play including match style, rate of fire and coaching. 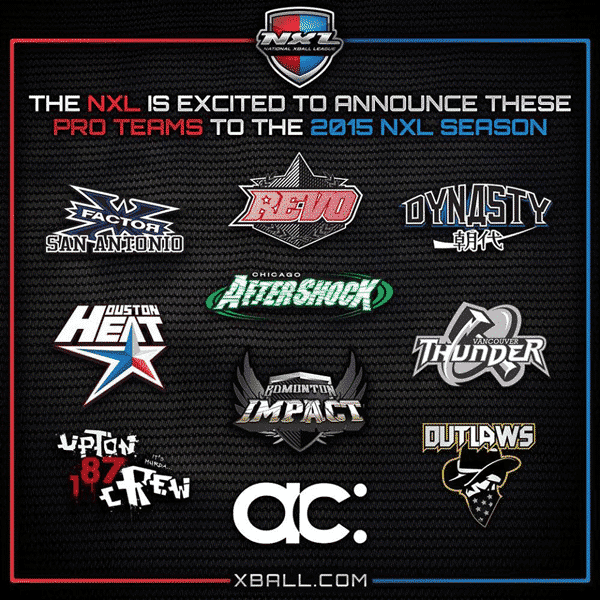 It is the NXL’s pleasure to introduce you to the first wave of professional teams committed to competing in the 2015 NXL Professional Division. The NXL Professional Division will represent the most talented paintball competitors from across the world. Many of the following teams include owners and coaches who also run divisional teams, paintball fields and local tournament circuits. Their initial feedback in establishing the NXL has been invaluable and essential in creating a league based on the voice of the players. The NXL looks forward to working with the many divisional team owners, coaches and players who have expressed interest in joining the league as players and advisors. For more information on becoming a part of the NXL, email NXLinfo@gmail.com.

AC Dallas
“We could not be more pleased to be part of the professional division in the NXL” Greg Pauley, AC Dallas

Baltimore Revo
“Revo is excited that the NXL has decided to give the players what they wanted. A league that listens and responds to their players. Baltimore Revo is looking forward to the first event.” Rick Hartman, Baltimore Revo Owner

Chicago Aftershock
“We are excited about being part of the next era of tournament paintball, the NXL. Their commitment to a player first approach is what we need to bring back to competition paintball.” Renick Miller, Chicago Aftershock Owner

Edmonton Impact
“Our team has been waiting for this to happen for a very long time and we’re happy to be on the ground floor of it.” Dave Baines, Edmonton Impact

Houston Heat
“Houston Heat is incredibly excited to be a part of the new NXL! We’re eager to see the new direction of tournament paintball and incredibly thankful to be included in this new venture and be provided with the opportunity to represent our amazing sponsors and compete against the best teams in the world.” Tim Montressor, Houston Heat

Seattle Thunder
“Seattle Thunder is excited to be part of a league that understands what the industry needs, and what the players need and want in competitive paintball. We are looking forward to what the NXL will bring to the table this year, and many other years to come.”  Corey Field, Seattle Thunder

TradeMyGun Outlaws
“Simply put, we feel this is the right direction for paintball” – Jeremy Salm, Trade My Gun Outlaws Captain

Upton 187 cRew
“upTon 187 cRew has joined the NXL for the remainder of the 2015 season. We’re excited to be part of this historic undertaking and look forward to helping bridge the gap between the various game formats across the world. We look forward to working with the NXL management to create the ultimate x-ball league for the players.” Dave Painter, upTon 187 cRew Owner