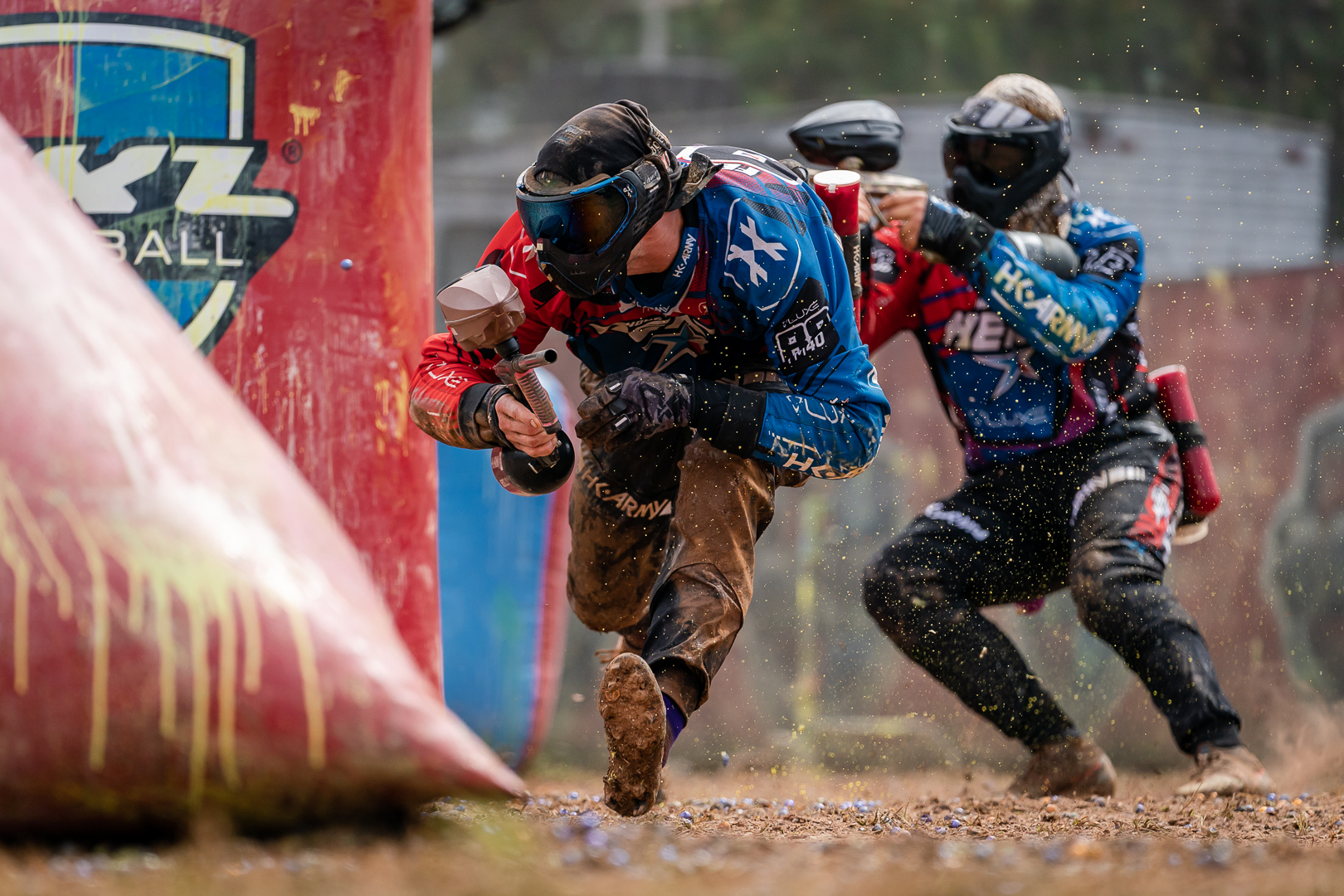 The second major event of the NXL Professional Paintball League is over and Houston Heat is the pro division champion after beating Edmonton Impact in the finals in Royersford, PA. Players and fans came from all over the country to watch and compete in the Mid-Atlantic Major and the fast field combined with an aggressive layout created a uniquely positive experience. This event was all about resilience and grit, and teams across all divisions rose to the occasion.

The general consensus at the field was positive. Houston Heat player Ryan Moorhead had this to say; “This ground is playing really quick, I’m able to run quickly on it, and the future of this location is unlimited. The ground didn’t change our preparation at all.”

Long-time professional player and San Antonio X-Factor owner, Alex Martinez, shared a similar sentiment; “Honestly, a field is a field. I played on a lot of baseball fields back in the day, and this brings back a lot of good memories.”

On the Pro Field Sunday.

After two days of competition during the preliminaries on Friday and Saturday, the top 10 teams moved on to compete in the event playoffs, affectionately known to the players as “Sunday”. Teams compete in seeded head-to-head matchups to determine the winner of the event.

One of the biggest surprises in the field of Sunday teams was the underperformance of event one runner-up, Los Angeles Infamous. After a dominant event one, they barely snuck into Sunday with a 2-2 record. They went on to convincingly beat X-Factor in the Ocho-Finals, but then dropped their quarter finals match to eventual runner-up, Edmonton Impact.

Seattle Thunder also firmly cemented themselves into the conversation as a top NXL professional program. After event one, many fans and players were writing off their performance as an outlier; Corey Field and the rest of Thunder felt differently. They rolled through the prelims, only narrowly losing to Red Legion, but a tough quarter finals matchup against Dynasty proved too much for Thunder and they finished the event in 6th place.

Speaking of tough, San Diego Dynasty provided maybe the most gutsy performance we have ever witnessed in the pro-division. Going into the event, Dynasty was already a bit short handed after the departure of Tyler Harmon and the broken hand sustained by Arturo Andrade. Disaster struck during the event as well, as injuries to both Dalton Vanderbyl and Alex Fraige left them with just 6 players before Arturo made the decision to play through his broken hand. Blake Yarber, Ryan Greenspan, and Marcello Margott played nearly every point of the event and through sheer will they pushed Houston Heat to the brink of elimination in the semi-finals.

Impact breezed through the preliminaries, quarter finals, and semi-finals, and looked nearly unbeatable all weekend. In the preliminaries they dropped a close match to the Los Angeles Ironmen 6-7, but generally they were playing their refined and disciplined style of paintball that fans have come accustomed to. Their veteran roster and elite coaching staff was a huge challenge to overcome for many professional teams all weekend long, all except for one, Houston Heat.

The Pro Finals, a redemption for Heat.

The Finals matchup of Houston Heat and Edmonton Impact looked like it was going to be the matchup of the season but Houston Heat had other plans. After missing Sunday during event one at the NXL Sunshine State Major, Heat went back to the drawing board. They brought in NXL Superstar Tyler Harmon and finally were able to add Konstantin Fedorov back to the active roster after a year-long absence from professional paintball due to COVID.

From the first point Heat looked in control of this match. The snake side combination of Tyler Harmon playing behind Chad George is scary and Tyler’s ability to control that entire side of the field may have been the key to Heat’s success. Chad George, once again, showed why he is one of the best snake player in the NXL and made the snake off the break nearly every single point of finals. This combo had star player Alex Goldman struggling to find room to operate on the snake side for Impact. Although Brandon Cornell was scoring tons of eliminations from the dorito side, Houston Heat proved too much for Impact.

They were able to slow down Cornell enough with their veteran combo of Fedorov and Mishka and ultimately Heat was able to win the event with a score of 5-3. One interesting note from the pro finals was the rotations made by both teams, specifically Heat. While historically we have been used to seeing Heat run hockey style lineups, the entire finals matchup saw nearly the same five starters on the box for Heat. This will be interesting going forward to see what Coach Todd Martinez’s plans for the roster are.

Walking over to the divisional Xball fields of the event provided the same level of excitement and competition as we saw on the professional field. This event seemed to favor the NXL teams that were from the Mid-Atlantic and Northeast regions, as the finals matchups were filled with teams from the area.

Annapolis A-Team was able to finally secure a victory in the semi-pro division and so far are looking to be the favorite to win a pro spot at the end of the season. They played an extremely disciplined style of paintball; Benny Cunningham and Ethan Adams were able to consistently produce eliminations from the snake side and Mick Melochek was seemingly able to shoot someone off the break every point. After going down 0-2 early, they pulled off a huge comeback win against Blast Camp to win the semi-pro division 6-5.

The matchup in Division 2 was a slugfest between Texas program Austin Notorious and the Killers out of Florida. The presence of the more experienced Marky Frans and Anthony Bowles was notable for Notorious all match long where they secured a 5-3 victory. If they continue to play this well, we will surely see this program in the semi-pro division next season.

In Division 3, New York Brave was able to pull out a victory against the AG Knights and finally secured their first NXL event win after years of dedication to building their program and looked really good all event, the layout really fit their style well. Their mercy rule win was impressive and they should be a consistent Sunday  team the rest of the season.

On the final divisional xball matchup in Division 4, Coalition out of Texas was able to defeat DBS Factory to secure the victory 6-2. They were able to persevere with a short-handed roster and proved once again that Texas may very well be the most competitive region in paintball.

The Vendors area, Gelly Ball is a hit.

The vendor area and trade show at the event had a great energy and fans were able to check out a large assortment of products from all the major event sponsors like HK Army, Dye, Virtue, Bunkerkings, and many others.

The fan favorites from the vendor area had to be Gelly Ball and newest NXL vendor, Reign Total Body Fuel. The Gelly Ball booth had a miniature airball field setup where they provided their Gelly Ball shooters and safety wear for attendees and fans to battle it out. It was a very popular booth and seemed to be packed all weekend. It is a great way for young players to participate with their friends and family and learn the basics of paintball.

One of the longest lines at the event was at the Reign Total Body Fuel booth. They were providing players and spectators complimentary drinks from their product line all weekend long. Their high-performance fitness drinks were being consumed by players throughout the event and I am sure more than a few players can credit their success to the energy and boost that Reign provided.

Biggest Moments of the event.

1) The Return of Fedorov and Heat clicking:

Konstantin Fedorov’s return to the pro division put the entire league back on notice; the best player in European history hasn’t lost a step. After winning the CRBN Golden Barrel award for the most eliminations with 28, it is hard to imagine an event where we won’t see Heat in the finals at. The chemistry in the Houston Heat pit is electrifying and Todd Martinez is coaching at an elite level. Full pro elimination stats are available at MyFanWagon

2) The Resilience of Dynasty:

The third place winner at the event, San Diego Dynasty, silenced all the critics following the departure of Tyler Harmon. Dynasty seemed to live up to the message they were relaying going into the event; The Dragon is bigger than any single player. Although short handed for most of the weekend due to untimely injuries, the Dynasty roster endured and put together an inspiring performance. Ryan Greenspan somehow looks even better than he did before his back injury, Alex is taking on a larger role again, Marcello is the best support player in the league, and Blake Yarber is playing at an elite level. With the emergence of Mike Urena as a threat in the snake and the steady veteran presence of the Dynasty roster, we will see them win an event this season.

Mike Hinman as a professional paintball coach is, quite simply, elite. His ability to build a roster and inspire players to play above their own ability is absolutely unmatched in the NXL Pro division. In just two events, he has taken a defeated San Diego Aftermath program and turned them into a dangerous team in the pro league. All weekend long they played a style of paintball that was hard to match by even elite professional teams like AC: Diesel and Moscow Red Legion. Hinman has this young roster buying into his message and after a 4th place finish, the rest of the pro division is being put on notice.

Looking Towards the next event.

The next NXL major event we will head to the Windy City Major in Chicago, IL on September 17th at the iconic Chicago Gaelic Park. That will give professional teams plenty of time to plan and prepare for another chance at an event win, and ultimately a chance at the series title. For divisional teams, they will have the chance to prove themselves even earlier, with the NXL Golden State Am Open being held at Capital Edge Paintball Park in California on August 13th.

Special thanks goes out to Enrique Gonzales Photography and Rob Moore of Flockhouse Photos. Thank you to the National Xball League for their cooperation and for hosting a great event.