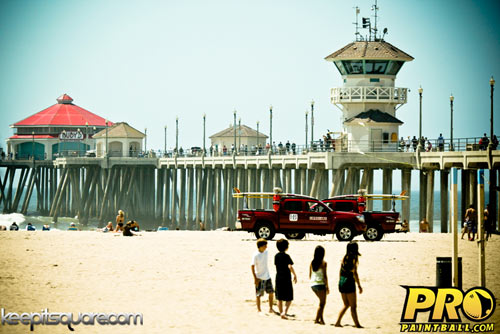 “The field layout for Huntington Beach is getting it’s second round of testing this weekend. We’ll let you know as soon as the layout is finalized and out which should be no later than March 3, and hopefully sooner.”

According to the official statement, the NPPL has released the layout to a limited number of teams in order to fine tune the placement of bunkers. To some, this might raise questions about fair play by providing the layouts to some teams and not others prior to a public release date. The NPPL later announced that most of the Pro teams have a draft of the layout, with confirmation that San Diego Dynasty has played on one of the drafted layouts. The pro paintball players are said to be examining the field to make sure it plays well and to look for possible camera angles for ESPN. For those of you in the area of a regional pro paintball practice facility you might stop by and try sneak a peak at what may turn out to be the NPPL Huntington Beach Layout. For the rest of you, stay tuned for the latest paintball news and gossip from ProPaintball.com.