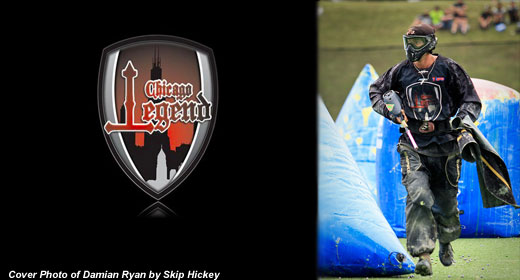 Pro paintball team Chicago Legend secured their first win in the NPPL 7-man pro paintball series during this weekends NPPL DC Challenge. The NPPL DC Challenge was held at Pev’s Paintball Park in Aldie, VA this past Friday through Sunday where 66 teams competed for the championship trophy. The weekend proved to be interesting (to say the least) for the Pro paintball division. After an intense battle for first and second place, the best of 3 game series between Arsenal and Legend ended in a 1 on 1 match which is very uncommon. Each team selected their best 1 on 1 player for the game finale. Chicago Legend choose Damian Ryan and DC Arsenal chose Justin Rabackoff. Both players fired tons of paintballs at one another and relied on sneaking around the field to out play their opponent. In the end, Damian Ryan of Chicago Legend shot out Justin Rabackoff and won the 1 on 1 championship and title for Legend.