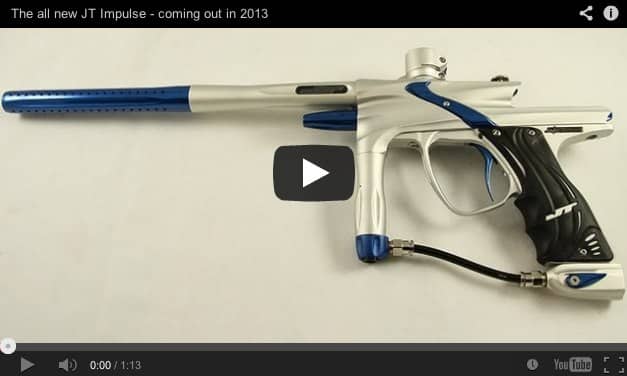 The new Impulse paintball gun from JT has been unveiled. The Impulse paintball gun was a popular tournament paintball marker in 2004. Redesigned by Smart Parts in 2009, the Impulse featured hinged eye covers, a q-lock feedneck, a freak barrel system, an air cushioned pistol, laser break beam eyes, and best of all, a hose-less design. Smart Parts went into bankruptcy during the economic hard times and its assets (Patents, Trademarks & Machinery) were purchased by Angelo Gordon, owners of JT & Empire Paintball in 2011. Since then, JT Paintball took the Impulse through another series of changes. The JT Impulse paintball gun incorporates balanced valve technology that will help make your shots smoother. One of the changes that leaves us most concerned is the incorporation of a hose between the regulator and the asa. In our eyes, the hose-less design of the 2009 Impulse was one of the features that made it so impressive. Stay tuned for further details as they roll in this morning.

John from PBNation had a chance to shoot a quick video with the new JT Impulse Paintball gun.

Are you excited to see the Impulse make a return to paintball? What do you think about the use of a hose on a previously hose-less gun?