The Iron City Classic paintball tournament has concluded and it was, yet again, one of the best events of the season. Teams competed fiercely over three days in the 5-man and 10-man formats for a chance to win the Iron Throne. The venue and fields were the talk of the event, with Russell, Ryan, and the rest of the event staff producing a top notch event that is truly for the players.

San Diego Dynasty came out on top in the 5-man event with a dominant win cruising all the way to finals. On the 10-man fields, Los Angeles Infamous didn’t lose a single game all weekend and won the event in maybe the most assertive way we have ever seen.

The Friday 5-man event opened the weekend for fans and players and it provided great action and stories all throughout the day. The competition throughout the preliminary round of 48 teams was fierce with major professional programs like Dynasty, AC Powerhouse, Philly Americans, and the Bay State Bandits all putting up strong efforts.

NRG Elite surprised a lot of fans by coming into the event on Friday and winning every single preliminary game and earning the number one seed. Dynasty once again showed why they are one of the best teams in the World with their methodical and calculated style of play and solidly beat nearly every professional and amateur team they encountered with only a single stalemate against OPP in the prelims on the hybrid field.

In a stacked semi-finals, fans saw San Diego Dynasty and the Bay State Bandits match each others score with 191, both earning one of the three finals spots. In the third bracket, things got a little tense with multiple MAX wins but NRG Elite continued their dominance and earned the final spot in the finals match.

In the finals, the Bay State Bandits took charge with an early win over NRG Elite. This meant that San Diego Dynasty would need to win both of their games to win the title. Dynasty answered the call in game one and solidly beat NRG Elite 94-10, knocking them out of the event. This means it all came down to the final game of the day; whichever team won this game would be crowned the 5-man champions.

With both teams playing a slower paced game, Dynasty chipped away at Bay State and after both sides traded blows, Dynasty got a late flag pull to propel themselves to the win and take home the 5-man championship.

Saturday marked the start of the 10-man preliminaries and the 72 team field was stacked with professional and amateur paintball talent. The prestige of the Iron City 10-man crown continues to draw in the largest professional programs from around the globe and it provided some of the best action of the season for fans and players.

The prelims went as expected with major programs playing well, however there were some major surprises with a few pro programs falling short as well as amateurs teams that performed well above expectations.

In Bracket 1, Infamous came out on top with a perfect record of 8-0. They had a scary moment on the mounds fields against Rico’s Raiders when they lose four players off the break from the snake side. Down on bodies, Billy Bernacchia of Infamous had a heroic game. Facing four players on the snake side of the field by himself, Billy methodically eliminated them one-by-one to win Infamous the game.

San Diego Dynasty came out of Bracket 2 with a dominate preliminary round. Fans finally got to see Marcello Margott on the 10-man fields and he played at an elite level. Legendary pro Davey Williamson played very well for Dynasty all weekend and was scoring tons of eliminations off the break and late in the game for Dynasty to help propel them to the finals.

Brackets 2, 3, and 4 were all highly contested with multiple top-level professional teams scattered throughout. One of the best teams of all time, the All Americans, posted the second highest score of the prelims of 690 to come out on the top of their bracket. The Master Blasters and Image both had solid performances as well to both win their bracket and earn a spot on Sunday.

In one of the most surprising and most determined efforts of the entire event, Adrenaline came out on top of their bracket. After losing their first three games of the day, with a max loss, they found another gear and went on a five game, near perfect streak to barely early a spot in the quarter finals.

The last two brackets saw NRG Elite and Chicago Farside come out on top to earn a spot on Sunday. The remaining 19 spots for the quarter finals were earned by the other top scoring teams of the preliminary round with some teams missing the cut by less than a few points, showing just how competitive this year’s event was. 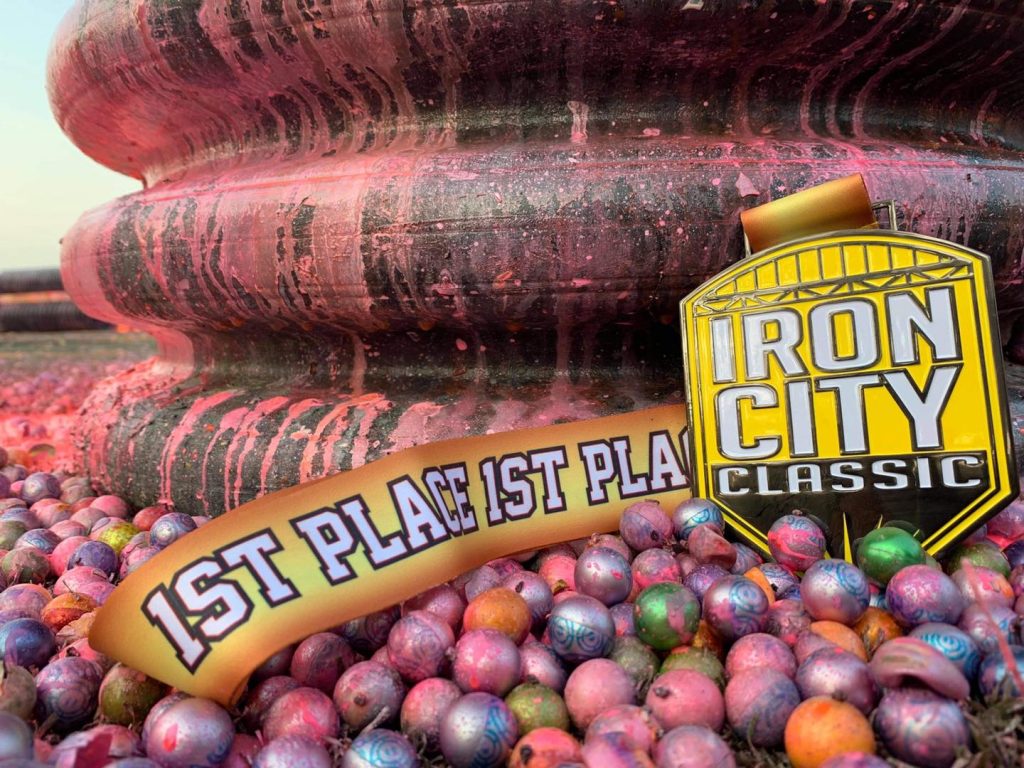 Infamous once again came into the Sunday quarter and semi-finals in dominating fashion, they had near perfect wins against CEP and Gridlock in the quarters, losing only a few bodies to earn the first of three coveted spots in the finals.

After a surprisingly shaky performance early in the event for the Philly Americans, they called on their legends like Ryan Moorhead and Nicky Cuba to lead the charge through Sunday, beating both NRG Elite and Fight Club to earn the second spot in the finals.

The last finals spot up for grabs went to the surprise team of the event, Hydra Fit. Made up of mostly amateur players from Paintball Fit in Texas, as well as a few young pros from AC Dallas, no one expected this team to make a run all the way to finals. They beat one of the best teams of the event in the All Americans to earn their spot among the elite. Colt Luckau continues to put the league on notice with his high-IQ and methodical approach to the game.

In the finals match-up, Infamous looked determined. Under the elite game-planning of Ryan Brand, and relentless attack from Billy Bernacchia, Archie Montermayor, and Chris Lasoya, they were able to pick apart both Hydra-Fit and the Philly Americans to preserve their perfect record and win the event. Drew Templeton was playing at a high level all event, and consistently won games all weekend for Infamous, and he earned the event MVP. The Philly Americans earned the Silver trophy, with Hydra Fit placing third.

One of the hottest storylines of the event was the inaugural All-Star game. As we outlined in our event preview, the legendary rosters on Team Fraige and Team Moorhead squared off in a best of three match to both give the fans a show, and answer some of the oldest questions in paintball of who the best players of all time truly were. Danny Manning was a surprise commentator for the game and fans loved hearing the Traumahead legend back in the booth.

In game one of the All-Star match Team Fraige came out swinging, sending Carl Markowski to the left side 50 and Chris Lasoya to the center 50 off the break. Alex Fraige and Chad George got into a great heads up battle in the snake but Adam Gardner forced the issue for team Fraige and ran through on Chad, taking him off the field. Carl then released up the center and shot 3 players off the back line with Alex Fraige pushing down the snake. Stuck in both corners, Alex Martinez and Todd Adamson of Team Moorhead survived the onslaught of run through attacks to pull off a 2v4 to win the first game.

Game two was just as exciting. Team Moorhead rolled out a piece of the legendary 2005 XSV roster, fielding Jon Richardson, Rich Telford, and Matty Marshall all on the same line. Team Moorhead looked in control early after losing multiple bodies, but Carl Markowski showed why his legendary speed is so feared. He pushed down the snake to shoot out 3 players and open up the field for Corey Field and Greenspan to close out the game from the snake.

Game three was absolute chaos, with all 15 players from each side taking the field for a 30 player mashup of the greatest players in paintball history. Team Moorhead got great positioning early and was looking like they had the game won. Alex Fraige pushed the center, leading the charge with Carl Markowski in the snake but both were eliminated. Just when it looked like Team Moorhead had the game won, chaos ensued; Alex Fraige reinserted from the deadbox and Ryan Greenspan ran down the snake. With the game clock at zero, Jon Richardson re-inserted back into the game for Team Moorhead and ran down the field and eliminated LJ Parrish. The refs allowed the game to continue at the chants of the fans, and Matty Marshall and Rich Telford were once again Heroes for a Day and shot out the rest of Team Fraige to win the All Star Game for Team Montressor. 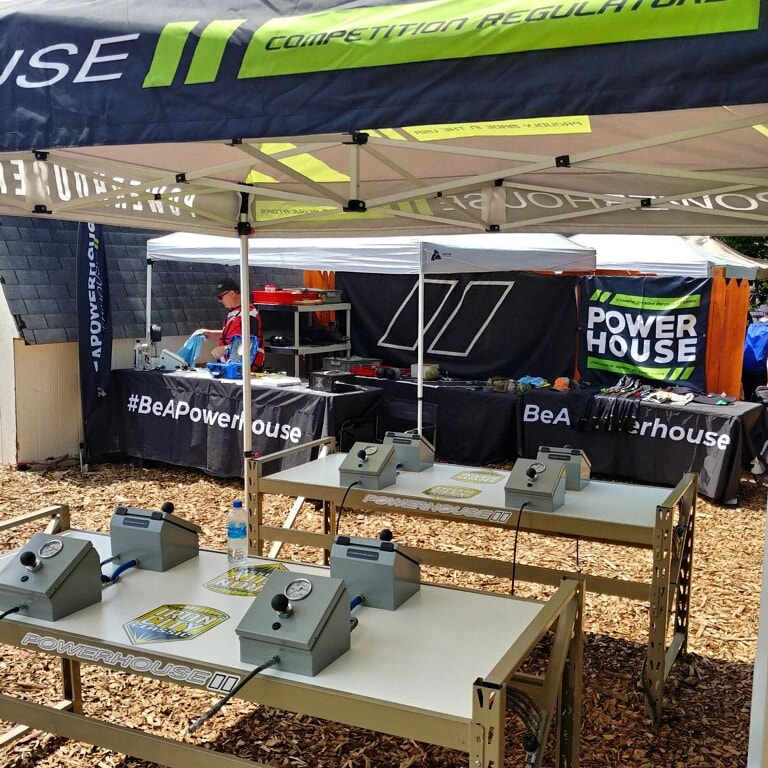 The Venue and Vendors

The trade show at this year’s event was packed full of some of the newest gear on the market. Powerhouse had their best-in-industry regulators on display and provided the air fill stations for all the players at the event.

Major marker manufacturer, Planet Eclipse, debuted their new FL valve for their very popular mechanical marker, the EMEK to rave reviews. Players were flocking to get this ultra light valve installed in their markers to get the competitive edge at the event.

DLX and SP brought along a large array of markers and debuted their two marker limited edition run of TM40 memorial Luxe markers. One was presented to Tim Montressor’s mother and the other was on display at the booth for players and fans to check out.

In addition, there were over a dozen other manufacturers and retailers present at the event in vendors row, adding to the next level atmosphere of the event. Players and fans not only played and spectated, but were playing yard games, sharing memories and having fun.

A few major Coin Duel challenges went down as well, with the first on field Black Coin challenge to occur. Quinn Nadu (myself) lost to Ryan Greenspan in a 1v1 Cowboy Draw matchup. Many coins changed hands during the event as 1v1s and other wagers took place all over the venue grounds in between games and were really complementary to the fun and connective atmosphere of the event.

The Founders Award is a new concept introduced this year. It is an award that is given to a player or industry rep who has had a positive impact on the sport of paintball.

After dedicating his life to the sport of paintball, Charles “Big E” Holland of the Misfit Toys has been a mentor, teacher, father-figure, and so much more to thousands of players in the Northeast over his 30 years of playing the game. Entire generations of players and professionals can be traced back to Big E’s coaching lineage and his sage-like advice has helped many players achieve greatness.

His dedication to the game is unquestioned and he continues to always work hard in promoting the sport of paintball. There is no one more deserving of the Founders Cup than Big E and players from all over the country were thrilled to see him given this honor.

The event was once again one of the highlights of the season, with the love of the game being showcased for fans and players in a fun and relaxing environment. Tim Montressor’s legacy and memory will forever live on through this event, the fans, and players of this game. We will continue our event coverage with the Astra Invitational in two weeks.