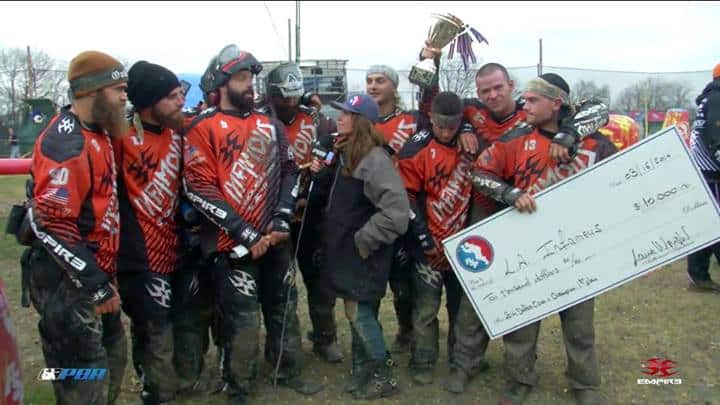 John over at PBNation posted a cool Point by point game breakdown of the final match:

The very long first point came down to a 2 on 1 against Zach Sherman from Vicious. Zach not only pulled it out, but the second Infamous player he shot also earned a penalty. The second game resulted in a two on one against Zach Wake from Infamous. Zach turned it around but he traded out with the last player resulting in no point. After another long point, Infamous tied it up 1 to 1. Zach Wake cleaned up and took Infamous ahead 2 to 1. Zack Patient earned a penalty after a face off at the snake 50, but Infamous still takes the point and goes up 3 to 1. After a huge penalty mess, the the PSP refs had to take a break to sort out the as of yet unaccessed penalties and their duration. Infamous started with 4 and Vicious with only 3 players but Vicious shoots two right away to make it 4 against 2. Infamous concedes the point to keep 17 seconds on the remaining Vicious penalty to make it 3 to 2 in Infamous’s favor but both teams start with 4 players. Infamous takes the point and the next point both teams start at full strength. Vicious takes the point and takes the game to within 1 point (4 to 3 in Infamous’s favor). Zach Wake has a game out of the snake and Infamous goes up 5 to 3. Chaos on the dorito side leads to a 2 on 2 with all 4 players on the snake side, but Vicious loses their snake player and concedes the point with not much time left on the clock. Vicious tries and Infamous wins the event!

To make the finals, Infamous beat Dynasty in overtime 4 to 3 after missing hanging the flag for the win in regulation time by less than a second. After a strong start, Vicious narrowly won over Xfactor in an amazingly lopsided game where the two teams took turns making long runs of unanswered points to play their first ever Pro PSP final.

Learn more about LA Infamous and pick up some official team gear at InfamousPaintball.com.