Note from JM: The following is a guest posting by Jeff Stein of the New England Hurricanes. Jeff raises several interesting questions about the “pro” designation, skill and paintball promotion. 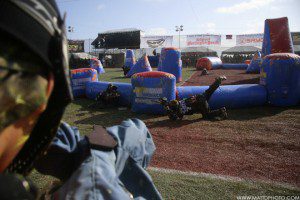 One of the observations from the last thread was that the “professional” designation was really just a construct of the league in which the player competed. I’m sure everyone’s read that we should do away with the “pro” moniker and replace it with “Open Class” and I think there is validity to that [ point of view ]. Its more factually accurate, certainly.

But putting that aside for a minute, I thought I’d open the door on the question, “what should a professional team look like?”. The answers I look for myself, and what I’d ask others to consider, have nothing to do with on-field prowess (although I would say there is a necessary modicum of skill required as a cost-of-entry to differentiate “professional” and “promoter”. Otherwise, we could all just agree now that Greg “Red” Hastings is the be-all, end-all of this conversation, as he clearly combines charisma, vision, hustle and a knack for selling himself and his ideas, and rightly deserves to be the best known paintball player in the world.).

So, I’ll put it out there for smarter men to consider:


In order to call yourself a pro, or your team professional, is it enough to play in the highest bracket of any given league?

As there is no unified ranking system, we really have no way to compare AXBL teams to Millennium teams to PSP teams. I get into conversations with Jacko and others on a semi-regular basis asking about the cost-value considerations of sponsoring pro teams. Would a sponsor serve its interests just as well with a top AXBL or CXBL team as with a PSP team? If so, it would be both less expensive and yield better results. How important is it to be in the most competitive league? Given that paintball media’s taken a hit, there is less overall event coverage, and much of the remaining press is self-driven, is it more important to play at the top or to get press?

Hypothetical (I can see this developing legs): I take the Hurricanes out of the PSP and put the team into the AXBL, we become a dominant team in the AXBL, we continue to drive press through self-promotion (do we get more or less press? A winning AXBL team versus a not-winning-right-now PSP team), we refocus on localized exposure. We do this for about 1/3rd the cost of the PSP. Are we still a pro team? Did we make a good move?

Please be forewarned, all you card carrying, kool-aid drinking AXBL cultists, I will delete any post that is evangelical. This ain’t about that. It’s just an example.