Get RED to the Chicago OPEN!

Red, the paintball super fan, has a posse. Fans were at a loss as to why RED, featured in the recent PSP webcast promo videos, was missing from the sidelines at the Mid Atlantic Open. Countless posts and threads on pbnation later, pro players Johnny Perchak and Alex Fraige have designed a campaign to insure RED makes it to the Chicago Open. 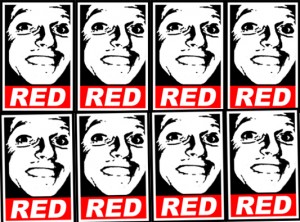 The man that raised the spectating bar to a higher level, Nick “Red”
Black, he’s cold as ice but twice as cool. Now YOU can take the
highway to the danger zone and support Red! Buy RED stickers and slap them on your gear, they will make you play better. The money will go towards a plane ticket to get him to psp MAO so everyone can enjoy his foam sword shenanigans!