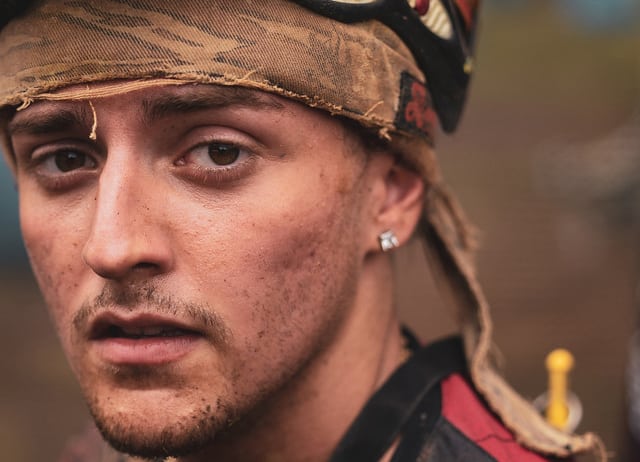 We  couldn’t be more excited to debut this first article with Chris Caputo of New Jersey Leverage in our newest Divisional Spotlight series. Chris is know throughout the Northeast US as a fundamentally skilled gun-fighter with great timing. He has also been setting style trends in Northeast paintball for a few years now and is always supporting his sponsor JT Paintball to the fullest.

At the heart of who Chris is, he is a team-first player who is quick to always give credit to others before himself. I had the chance to take a dive into what the support of his best friends and teammates means to him on the field, what his plans for the future are, and how he was able to develop so quickly. Chris exemplifies that unspoken brotherhood among paintball players that bonds us all so closely.

On Success and the Future.

Chris, you have just come off a great performance at the NXL Mid-Atlantic Major, placing third in Division 2. What sort of mental preparation goes into getting ready for Sunday paintball at an NXL event?

Chris: “You have to trust the other guys you’re playing with and just be ready to live in the moment on Sunday. You and your team have to be ready to do whatever it takes to win otherwise you will fall short. Paintball is all about inches so you have to play it out point by point, never get discouraged and always have faith in your team.”

Chris: “I would definitely attribute my quick rise to my team. I am a firm believer that you should work hard and give 100% in whatever you do. For me it’s playing paintball. I really have to say playing paintball with my closest friends makes it that much easier to try and be the best player I could be. I have been playing with these guys for over 5 years and we have fun when it’s time to have fun but we always grind hard before events. We all have the same hunger to win and get better every weekend.”

I have personally seen you compete against professional players and semi-pro players this past season in the TSXL Elite division and you have looked really competitive against them. Could we potentially see you in a pro jersey soon? Have any teams inquired with you?

Chris: “There was some talk about it being a possibility one day. You never know what the future holds. For now I’m just going to keep grinding with all the Leverage guys and enjoy playing the sport I love. I have been blessed enough that a couple different semi pro teams ask me to guest for them when Leverage can’t make some events. So I take those opportunities to it’s fullest when they come around. ”

Chris has been playing for his team, New Jersey Leverage, for a number of seasons now. Over the last three years they have really began to dominate divisional paintball in the Northeast. Out of Long Live Paintball in New Jersey, over the last three seasons Leverage has compiled three 1st place finishes, and six additional top 5 finishes. They have been one of the most successful teams in the region and are rapidly progressing through the ranks.

Over the last three seasons, we have seen your team, New Jersey Leverage, stack up quite the resume. What sort of advice would you give to other divisional teams trying to build strong programs? How has Leverage been able to play so consistently well?

Chris: “The best advice I would give for other division teams trying to build a strong program is build a bond with your guys on and off the field. Everyone on your team including yourself has to be willing to do whatever it takes to win. At the end of the day every person on Leverage wants to win every event we play. We’re so consistent because we have rostered most of the same guys since 2015. When you have been playing for this long it’s fun to play 2-3 days a week with your best friends. After this long you can to tell what your teammates are going to do just off their body language. We learn to play off each other and that’s why we play so well as a team.”

What sort of preparation do you and your team like to do for NXL events in the weeks leading up to them?

Chris: “I usually go to the gym 4-5 days a week to stay in shape. I try to practice 3 days a week leading up to the event to become familiar with the layout.”

Has there been anyone along your paintball journey who you can attribute your skill and success to?

Chris: “There are quite a few people that I attribute my skills to today. I learned a lot from the old NYC Vengeance guys when I first started playing back in 2008. Coach Tom has been the foundation of this team since the beginning. Last but not least, I attribute my skills to my teammates on Leverage. Every time we play we all give 100% to be the best we can for eachother. ”

Chris and Leverage look to be primed to continue their streak of top finishes this season, and I wouldn’t be surprised if we see them in the Semi-Pro division next season. Chris’s dedication to his teammates is at the heart of who he is, and his dedication to the sport of paintball is undeniable.

Chris wanted to thank JT Paintball for all they have done in supporting his team, as well as Long Live Paintball and Battle Creek Paintball. You can follow his journey on his Youtube channel CC Films.