Pro Paintball correspondant Tim Barnard was able to give us a recap of what went down at the first Hurricane Tournament Series. Here’s the scoop:

The first ever Hurricanes Series Event was held at Camelot Paintball, located in Chicopee, Massachusetts. The Hurricane Series is a PSP regional affiliate, which was refereed by Division 1, New England Hurricanes. And running the show was Jeff Stein, who organized the entire event. He also had a car full of New England Hurricane T-shirts he was giving out which was awesome! Also Billy Bernacchia was on site helping out and watching games, and talking to teams and players. It was perfect weather, sunny and in the mid 80’s.

The refereeing was on par. Few penalties were called, no favoring of a certain team. The event ran smoothly, with the exception of a few mishaps like the air going down to the pits, which was resolved and play kept going. All the teams played hard and fought until the end, great showing of teams. 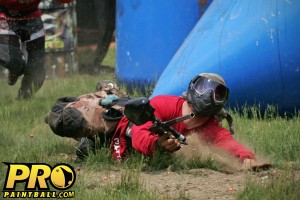 Thanks Tim. To check out more photos from the event, check out Tim’s Gallery