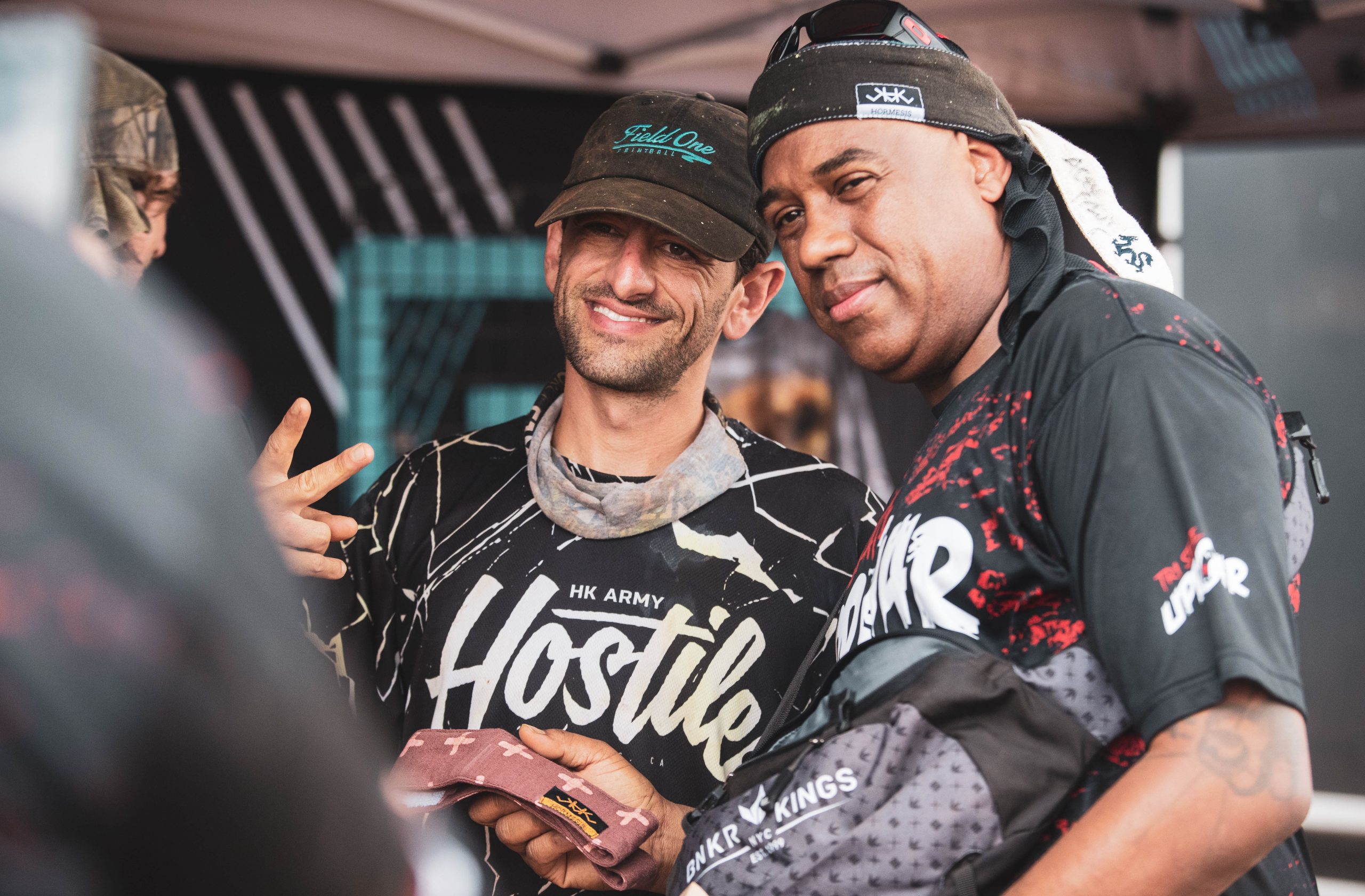 In the modern world of professional sports, pro athletes can often be inaccessible for the everyday participants and players. In the world of paintball, Alex Fraige and his company Coin Duel are rapidly changing that idea. This new and exciting game is bridging the gap between pro and amateur players and fostering a culture based around sportsmanship and fun in paintball.

The game has a fairly straight-forward concept; one player challenges another player for their coin in a paintball related challenge. Winner gets the coins.

I had the chance to talk to Alex Fraige in order to get a better understanding of his vision, his roots in business, and how he balances paintball and entrepreneurship. Alex has a deep love for the game, and his unique style of play has made him one of the best players in paintball history.

The Game of Coin Duel.

In many competitions, players simply have the memory of their achievement that slowly fades over time; in Coin Duel, players have a lasting memento in the physical coins themselves. Winning a coin is simple; challenge a player, beat that player, keep the coins. However, if you want a gold or silver you are in for a true challenge.

The Silver Coins are a bit more common and easier to get. The more prestigious Gold and Black coins may only be earned on the field. Gold coins are initially held by current active professional players only, but can be won through challenges.

Only a chosen few get the Black Coin variant, “The kind of people getting these coins are the legends that have been around for a long time. Not even just former pro-players, but say you have someone that has been working in the industry for 20 years and had a huge impact on the game, that’s the type of person we pick to give a Black Coin to.”

Professional players who hold gold coins have incentives to take on challengers as well according to Alex; “If a pro wins a silver coin, I will buy that coin back from them for a bounty. I am hoping it draws pros to local fields and if nothing else it could be something where the pro can win a few coins, pay for their training, and have some fun while doing it.”

“Any paintball player, even if its their very first time, could have that chance at beating a pro, it only takes one paintball. I had so many memories over my career and so many memories lost, and what is great is that these coins sort of allows you to immortalize your memory.”

In the game of Coin Duel there are three unique types of coins that a player can earn; Silver, Gold, and Black Coins. Silver coins can be purchased by any player according to Alex “Currently we sell the first edition silver coins directly on the Coin Duel and Hormesis website. Our plan is to release limited edition runs of each coins to make them collectible and let them hold a bit more meaning.” The first edition coins feature Oliver Lang, Alex Fraige’s lifelong friend and a player widely considered the greatest of all time.

“You can buy the coins, but you can also try to get them from some of the top pros like Ryan Greenspan or Billy Bernacchia. How you acquire them is kind of up to these Coin Masters; maybe see them at a clinic and win one for doing something that stands out to them. Many events also have Dilly Donuts truck in attendance, and we gave some coins to Frank Connell because its kind of this fun and shady way to get a coin like “Hey Frank you got those coins” as you stand behind the donut truck, its silly and fun.”

The Silver Coin is your bridge into the game and starts a player on their path to a Gold Coin or a legendary Black Coin. “Once you get a silver coin, this gives you the ability to challenge a pro who has a gold coin, but you run the risk of losing your silver coin to the pro and starting the process over again” said Fraige. The highest ranking coin always decides what the challenge will be and the winner keeps both coins.

Connecting with his love for the game.

Of course, this foray into the business side of paintball isn’t Alex’s first introduction to the sport, he is one of the longest-tenured and winningest players in professional paintball. Alex has been finding a way to balance his demanding pro paintball schedule with his business ventures, such as Field One, Coin Duel, and the explosively popular Hormesis.

His ambitions in business are grounded in the universal goal of connecting paintball players, and spreading the joy that the game has brought Alex, “Over the last few seasons I really have reflected on why I play the game and what is valuable to me. Through all this thinking I kept returning to the same thought; the things I valued most weren’t the wins, the world traveling, or the money; it was the people. I get to meet and connect with people all over the globe who love this game like I do and it has been my honor to do so. I have deep gratitude for all the players I’ve got to connect with over the year.”

However, that connection that Alex valued so greatly started to fade during the Coronavirus season of 2020.  “It was hard, everything was shut down and I will say I was pretty depressed for a time and feeling a lot of anxiety. I wasn’t able to get out to the paintball field and see all my buddies. So I decided to start getting on a healthy diet, stopped drinking, starting working out, and just focused on myself and my family. My wife was really important in getting me through this time of my life. Suddenly all of these ideas started to flow out in this catharsis.”

The start of these ideas came to be realized when, out of the blue, Alex heard from a life-long friend; “Oliver (Lang) called me one day and just said “hey! lets make headbands!” Now I hadn’t talked to Oliver in nearly three years, so on a whim, I did it,  just so we could reconnect. Then once we started making headbands I saw the Hormesis community growing and met some amazing people that really led me to dive into it fully.”

Alex has since been the key figure in the growth and development of Hormesis and their popular paintball headwear, and he is getting to once again share in this success with his life-long friend. That friendship has re-ignited the competitive nature of their relationship that once helped them both rise to the top of the competitive paintball world together.

“Oliver and I had this vision and it was a complete surprise in how much the community embraced it. It wasn’t about money or sales, but to just do something with my best buddy. I’ve always been a bit jealous of Oliver but it has driven me to always want to beat him whether it was on the field or in business. Its a natural competition that still drives us both to be great. It’s in that competition against each other that we have always found success, whether it be on the paintball field, or working in a business.”

Alex Fraige is a brilliantly creative individual and his relaxed, fun, and easy-going nature on and off the field is evident in the way he has built the rules of the game.

The rules of the game are fluid and merely serve as an outline for how it can be played. Alex really emphasized that the rules aren’t set in stone:

“I made the outline of rules but they are loose rules. If a Black Coin player wants to take a challenge from a Silver Coin holder, they can. I don’t want to rules to tie it down because it is about the community around the game and not just the coins themselves. I want a player to walk up to someone like Chris Lasoya, for instance, and challenge him. The rules are loose because I want any player be able to connect with legends and pros of the game because they could have been the pro player this challenger has looked up to their entire life.” 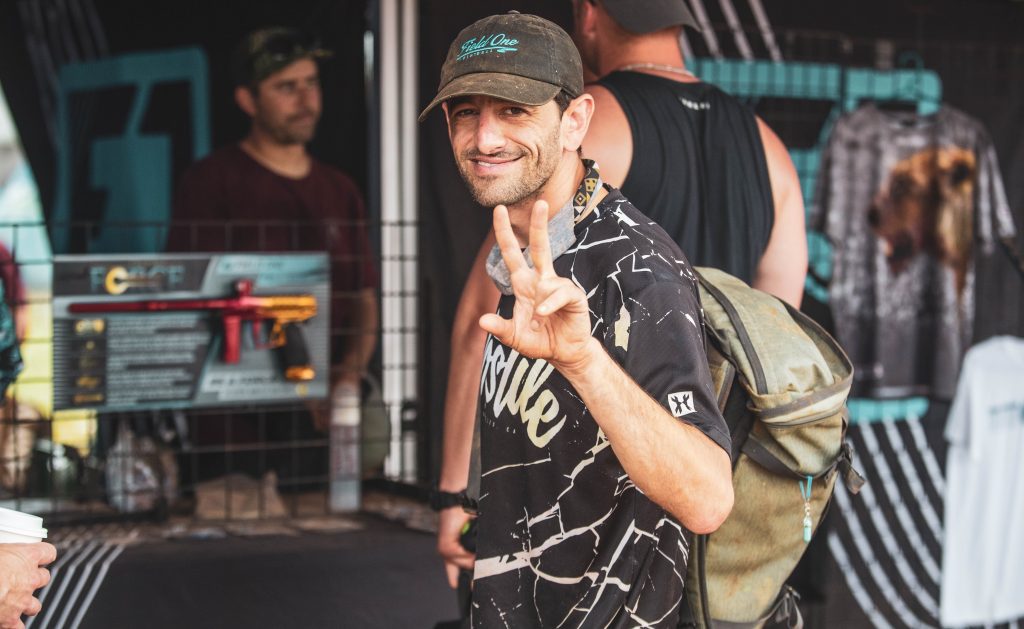 The entire premise of the game is founded in the idea of fostering new relationships on the paintball field with an added kick of competition.

This is what makes Coin Duel so special. Alex has found a way to combine the love of the game and the pure passion found in it where, ultimatley, everybody wins. Whether you leave with the coins, or walk away with a great story about how you almost beat a legendary pro player, you have fun and create a new bond that lasts a lifetime

All of the current Coin Duel standings can be found on the Coin Duel Official Page. Visit the Hormesis site to purchase a silver coin for your chance to make it on the leaderboard. You can also check out Alex Fraige’s other company, Field One Paintball.

Thanks so much to the legendary Chris Dilts of P8NT Magazine for lending us some photos from his vault. Thanks to Sam Bennett as well for his photos of Alex!