The Arizona Paintball Players League, a PSP Regional Series, has released the paintball field layout for event #2 at Disruptive Paintball in Tuscon, Arizona. Not sure how this one slipped by us (thanks Andrew!) but Arizona paintball players should start playing the layout if they haven’t already as the event is only 2 weeks away.

This layout is significant on a national level as their is a rumor floating around that the PSP will be utilizing elements of the PSP regional series layouts throughout the remainder of the season. 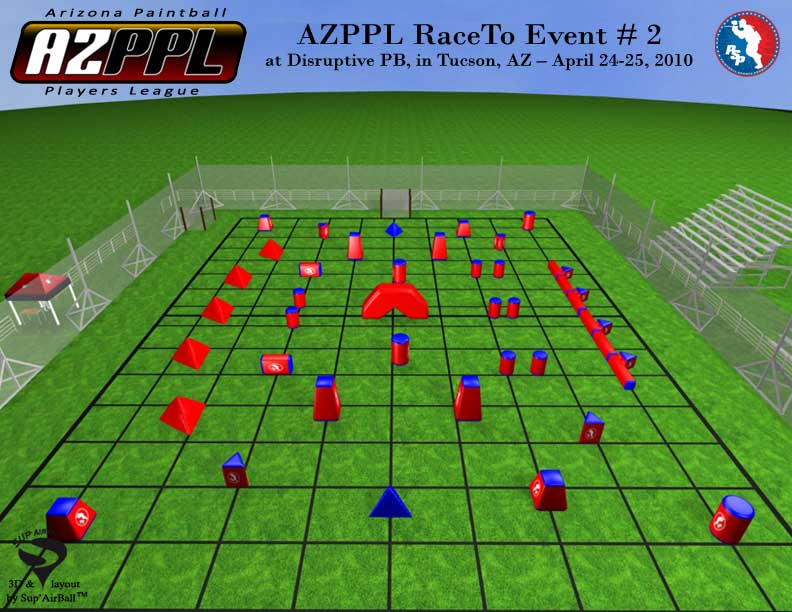 Be sure to check out the full story for the grid layout and a snake side view of the field.

ProPaintball correspondant, Tim Cerruti covered the AZPPL’s season opener for us. Read on for the latest AZPPL paintball news and event scores.

The 2 day event started Saturday with lots of cold rain, wind, and teams getting ready for the start of the season with the AZPPL. The Arizona Paintball Players League is one of the new regional series associated with the PSP and their Race 2 format. The teams played hard in their matches fighting to play in finals on Sunday.  A decent number of spectators showed up to watch the matches even in the rain. The Sidelines were filled with people yelling and screaming trying to help their favorite teams win.

Paintball Sports Promotions (PSP) has just released their 2010 affiliate program with other regional tournament series’ nationwide, along with a map depicting the locations in which these series will be held. Read on for the official statement released including dates and the regional map!

Jay from pro paintball team Scottsdale Elevation has released the AZPPL 2010 update. Inside there are several important updates including changes to the format, news on NXL ref’s joining the league, introduction of a premier division, and the unveiling of the 2010 schedule. We are proud to announce that this update introduces a new element of our site, the AZPPL section of ProPaintball.com. We will be increasing our coverage for the AZPPL in 2010 season and those to come.

Take my word for it folks, North American Paintball is about to get real interesting! We are proud to present the official release for the Arizona Paintball Players League.