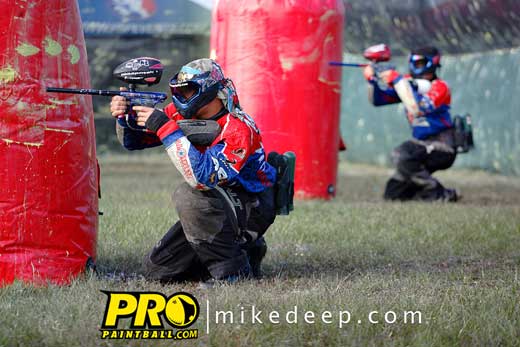 Looking back, last week’s 2011 PSP World Cup was a great success. Players and teams from across the world converged into the middle of Florida to compete for their respective titles. The final match up between pro paintball teams Tampa Bay Damage and the 2x returning champs Russian Legion reminded me of the great rivalry between USSR and USA hockey programs. The match was exciting to watch all the way to the very end and ultimately culminated in Tampa Bay Damage defeating reigning Cup champions Russian Legion. Exciting times for sure. In case you missed the final match you can watch (for free!) Tampa Bay Damage do battle against the Russian Legion at the 2011 PSP World Cup.

World Cup is looked upon as “the” event to debut new paintball gear. Vendors hauled the new paintball gear in from across the country and in several cases, sold out of their event inventories. Here is a brief synopsis of the events main attractions;

In addition to media coverage and countless meetings, I had the opportunity to play with my friends from LIFT in division 1. According to the score sheet we took (and gave) a few beatings. For those of us who were there it was a different story. There is true brotherhood on LIFT and it was an honor playing with the team.

On a related note, striking a balance between playing and covering events is much more difficult than it appears – but the battle is well worth it. There is something about the adrenaline rush when you step out on that field. The thought that you and your buddies have to fight five other dudes and make your way across the field — or else suffer the consequences. Playing competitive paintball with your friends is both invigorating and challenging. At the end of the day I wouldn’t change it for the world.

The weather was great. Aside from a bit of muck on Wednesday, this event was filled with clear skies, light breezes, and dry weather all weekend long. Everyone we talked to was having a great time both on and off the field. Here are a few highlights:

For those of you who were able to attend PSP World Cup, what did you think? How did your team fair? Did you pick up any new paintball gear?